HONOR officially announced that its press conference will be held on August 12th, and it is expected to launch its first foldable smartphone. The company announces this event as the “HONOR Global Press Conference. But yet, HONRO has not given us any clue of what is expected to come in the event. If you look at the revealed image, everything you can see in it regarding the Honor event, its name, date in a lovely picture. However, HONOR may soon begin providing teases of upcoming devices.

Furthermore, the HONOR Magic 3 will surely release on this occasion. That smartphone has long been rumoured to come and HONOR also indicated that it is here. 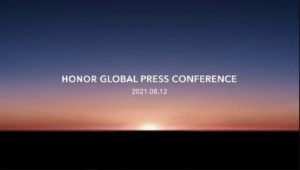 The HONOR Magic 3 may possibly be a folding smartphone. HONOR may use a completely new name for its Magic 3 series smartphones. Although information didn’t come from a well-known source about the HONOR upcoming device, so we do not know whether it is true or not.

There are many rumours about the company’s future gadgets since HONOR has been able to keep everything well covered. One thing is clear that the Snapdragon 888 Plus will power the Magic 3 series.

HONOR has also revealed that Google services will be pre-installed on its next gadgets. HONOR is no longer Huawei’s brand, and so Google services will be preinstalled on smartphones. It is still not revealed what design and style HONOR is going to use when it comes to the first foldable device. Probably a foldable tablet will be something like Samsung Galaxy Z Fold 2.

Anyway, we have to wait to see Honor’s upcoming gadgets. The event is a just month away, so some information is expected to leak in the meantime.