Honor announced the “Honor View 10” back in December. It appeared as the global version of its phablet, called Honor V10 at the Chinese market. Honor 10 View is one of the mid-range phones because it is quite cheaper as compared to the Mate series. The smartphone features an impressive 16 MP + 20 MP B/W dual camera and tall 5.99” FullView display. At first, the smartphone was introduced with 4 GB RAM or 6 GB RAM. Recently, the company announced that an 8 GB version of the smartphone, Honor View 10 Variant is on its way. Honor View 10 Variant launch date is decided to be August 14.

The company has finally announced the official launch date of the variant. The following image confirms the launch date and 8 GB version of the upcoming mid-range variant. 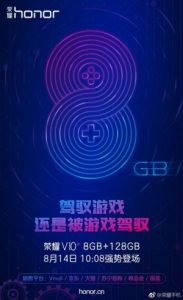 The Honor View 10 Variant will have Kirin 970 SoC. As we know that all the devices which have the high-end chipset from HiSilicon, feature GPU Turbo. So, this variant will also feature GPU Turbo. In addition to that, the phone will have EMUI 8.0, based on Android Oreo. It will feature an impressive 3,750 mAh battery. The phone will exhibit the Super Charge technology which will be capable of  0 to 50% charge in only 30 minutes. It will also feature an impressive 16 MP + 20 MP B/W dual camera. The good quality of the camera setup will change your photography experience. Moreover, the 5.99” FullView display will give a decent sleek tall look to the phone.

According to the official launch date, the smartphone’s new variant will appear next Tuesday at major online and offline retailers in China such as JD.com, Tmall, Suning, and Huawei’s own Vmall. However, there are no words about the price yet, but it is expected to be higher than CNY3,500 which was the price tag of the 6/128 GB version.