Gone are the days when only old age group was interested in politics and elections. Most of the voters in upcoming elections in Pakistan are between 18-45 age brackets. In the last elections, the voter turnout was more than 60% which is highest in the history of Pakistan. As maximum numbers of social media users are young people, they have built interest in politics and which clearly shows the influence of social media on elections.

Each party has its own official account and page that it uses to interact with the public and create its political propaganda. More and more people are informed via the Internet, specifically through social media.

As the elections are coming near, we can see a huge hype built up on all social platforms. The political candidates and their supporters are constantly posting their views on Facebook, Twitter and even on Instagram and Snapchat via images and hashtags. Each party has its own official account that it uses to interact with the public and promote its political propaganda. Even the mainstream media is quite active in publishing selective news on their social media to generate more traffic and keep the people interested. The overall growth in technology has also transformed the elections, the news, rumors and poll results now reach the public in a split second through mobile technology and the internet.

Due to the important role social media now has in our lives, political parties can now be seen quite active on social media. They are using social media to get their ideas out to a larger audience in an incredibly short period of time. Social media has given a lot of freedom to its users which is quite often misused by the people as well. American President Donald Trump is the most appropriate example of this.

He is an active Twitterati who is often under the fire for his condescending opinions about other people. Similarly, Pakistani Political leaders also voice their opinions about their rivals on their social media in an attempt to convince the public that they are better than others. As Twitter is the most active medium for spreading information and connecting with the larger audience, many Pakistani politicians are using it as their chief social media platform. Here are some of the latest stats or most popular politicians on Twitter: 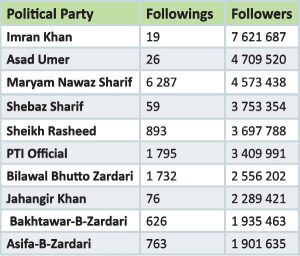 Besides Twitter, Live videos have also become a popular tool used by politicians and workers alike. Due to the important role social media now has in our lives, political parties can now be seen quite active on social media.

Whenever a political gathering is in the proceeding, people who cannot attend it can watch everything via live videos posted by parties and workers on their social media. Social media platforms have played an active role in building political awareness among people which were not possible in the past. Apart from that, we can now see a lot of memes and funny videos of various happenings in politics as well that keep the people updated in a lighter way; although, sometimes they do cross the line in their point scoring efforts. To keep up with the growing social media trends, political parties have set up separate social media cells that focus solely on promoting their political parties on all social media platforms.

Although the unauthentic and fake news has become a serious social media menace that is turning people away from it. Yet, social media is the only medium through which voters can directly interact with their leaders; this adds a personal touch in the whole process, making it the most popular tool among leaders and voters. However, there are many critics of modern-day social media usage who argue that this increased role of social media has somehow cheapened the political leadership as they are now more involved in political point scoring rather than actually doing something for the community. Also, the focus has shifted from the political manifesto of the political parties to private lives of the leaders.

Besides Twitter, Live videos have also become a popular tool for politicians which is used by politicians and workers alike. For instance, we can take an example of three marriages of Imran Khan which was solely his private issue but became part of the political debate someway.

Technology has transformed all aspects of human life; politics is one of them. Technology has changed our lives by increasing the speed of time. It has become the most important medium to connect with the masses and bring change to society.