As ‘Turbo’ is considered to be the simplest and quickest game mode. I taught you how to start a Turbo Dota 2 game in the previous blog. Now we will get into the game and how to play Dota 2. 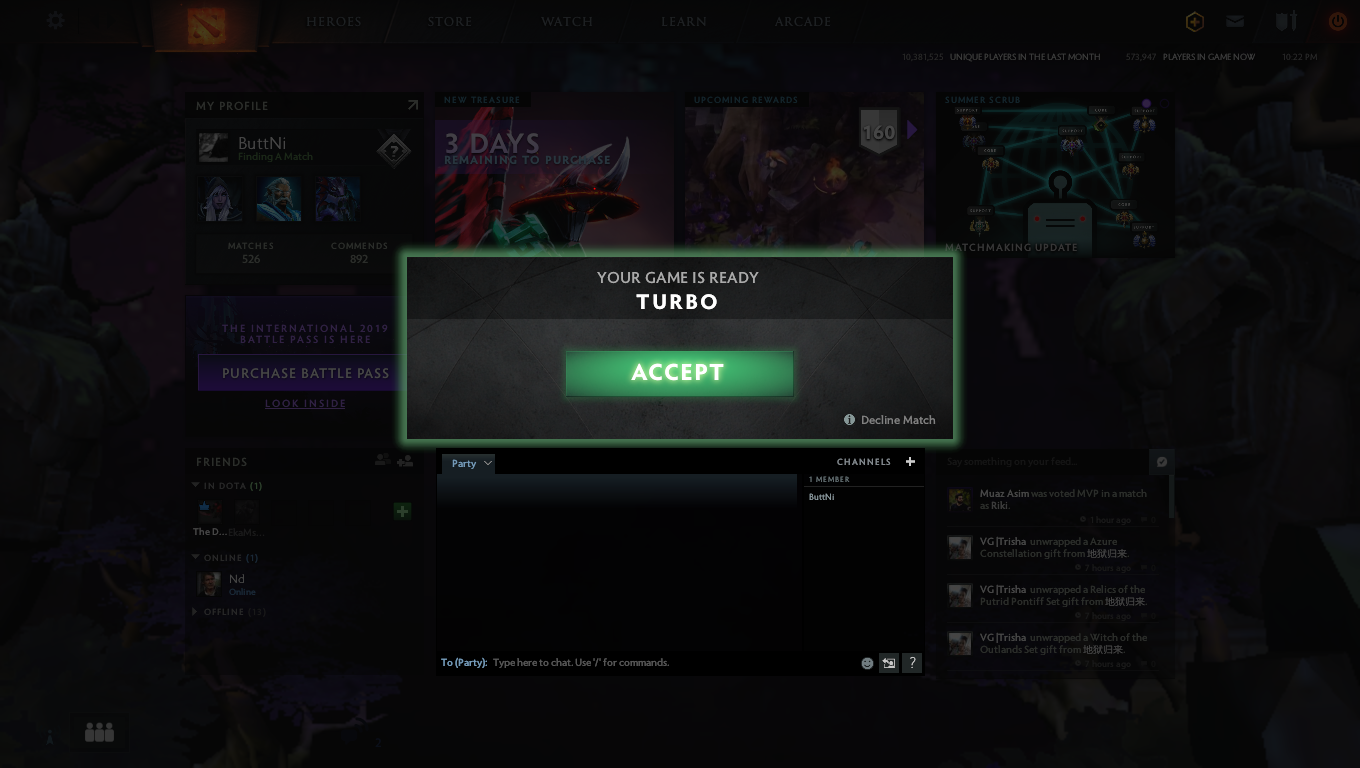 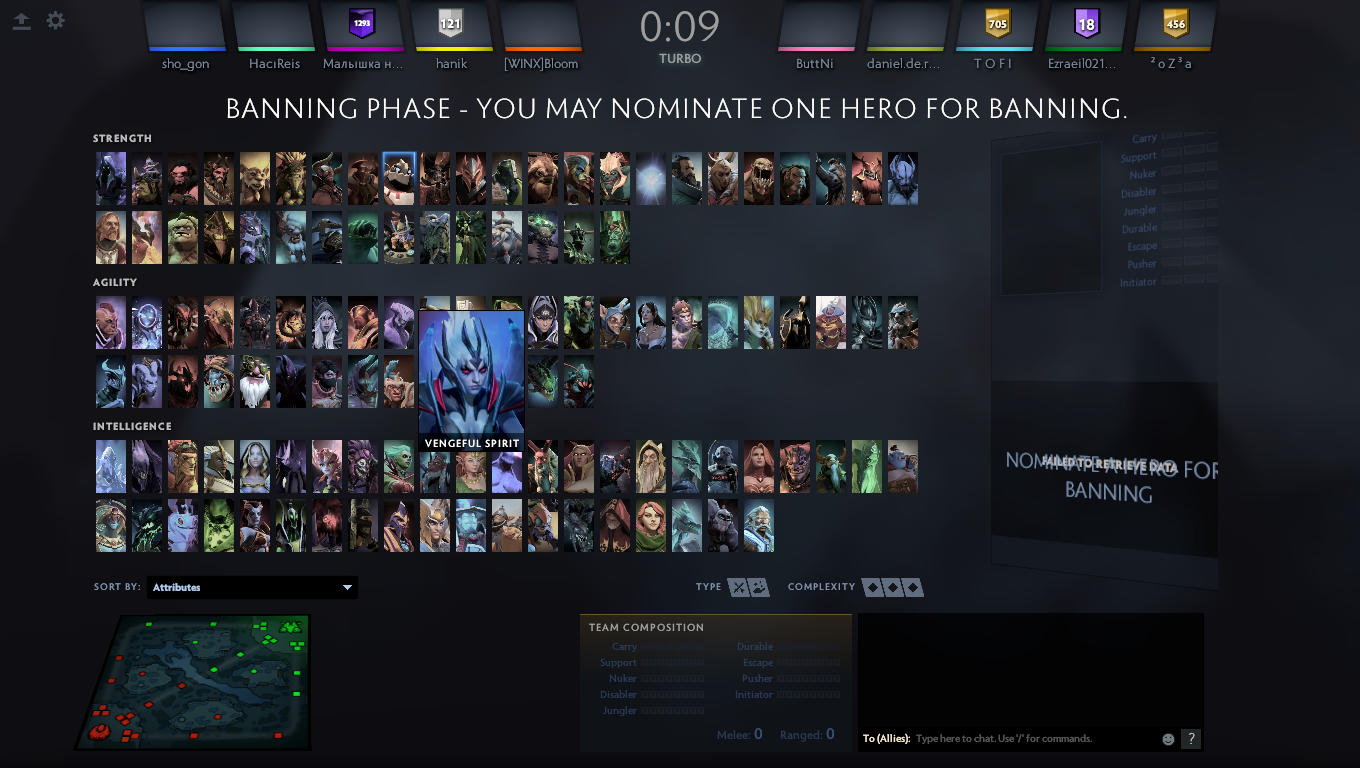 As soon as you click ‘Accept’ you will enter the game. The first thing you will have to do is ‘BAN’ any 1 hero out of the 100 available. You will be given around 10 seconds to do so. Go ahead and ban any hero you don’t want your opponents to pick. All your 5 team members and the 5 enemies are given the option to ban 1 hero each. That means a total of 10 banned heroes if everyone opts to do so. 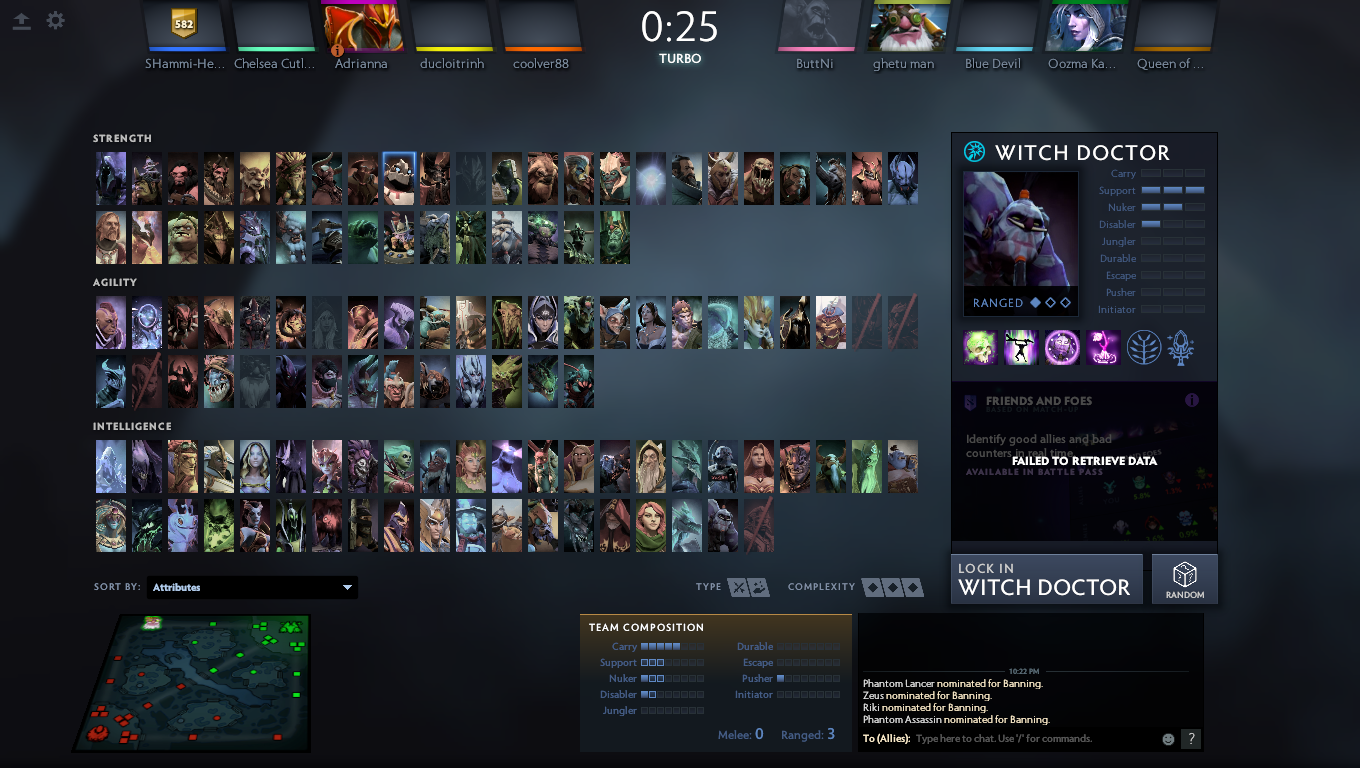 Once you are done with the banning, you will have to choose a hero for yourself from the available options. Just click on a hero and then click on ‘Lock In’. And you will be taken to the ‘Strategy’ screen. 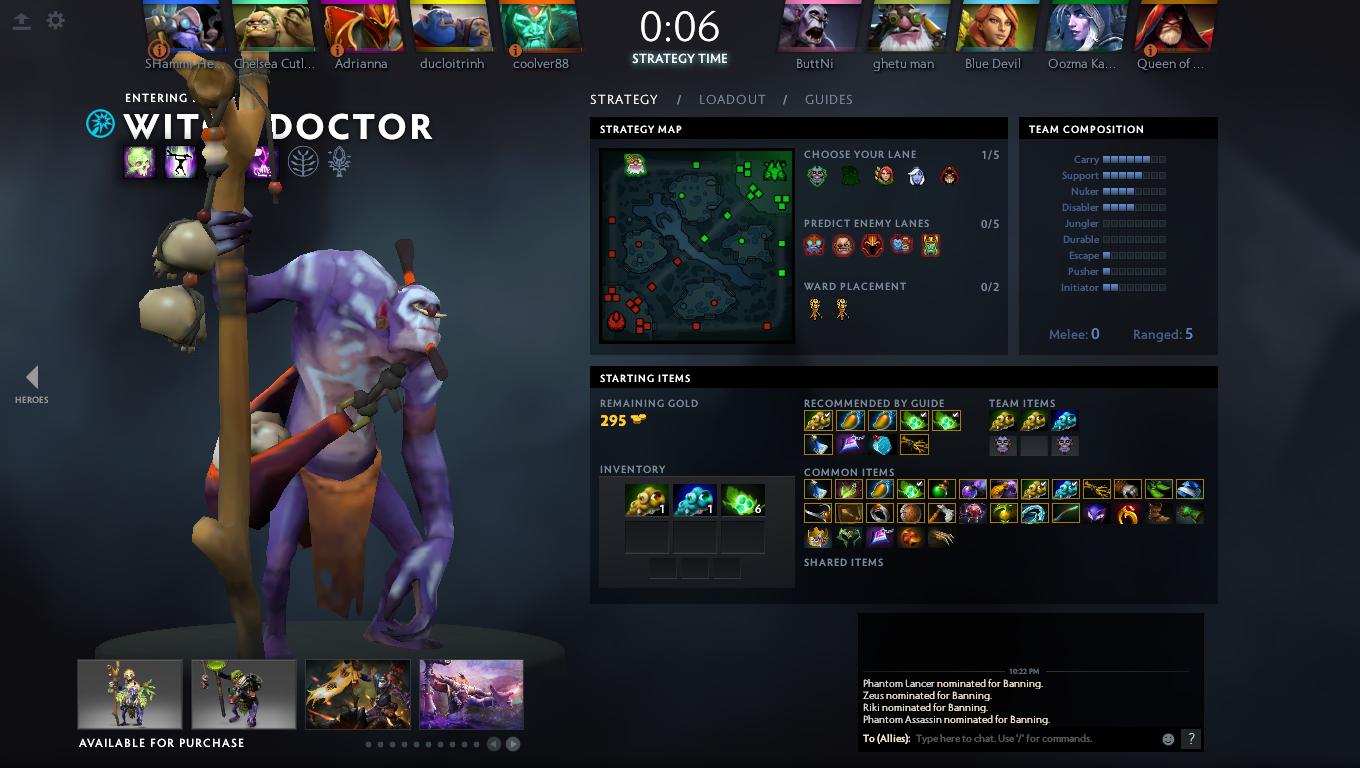 The team in which you are present is your team *a moment of silence* *a huge round of applause later*. The mini-map of the game is displayed here and later in the game as well. Thus we will discuss the Mini-Map of Dota 2 in detail. But for now, Green dots represent your side and Red represents enemies. The rest of the thing is that you are provided with a starting ‘Gold’ with which you can buy starting ‘Items’. Hover over any item to know what it does. You can also go to ‘Learn’ In the Dota 2 Main Menu in order to learn all about Items.

After the given strategy time the game will begin automatically. 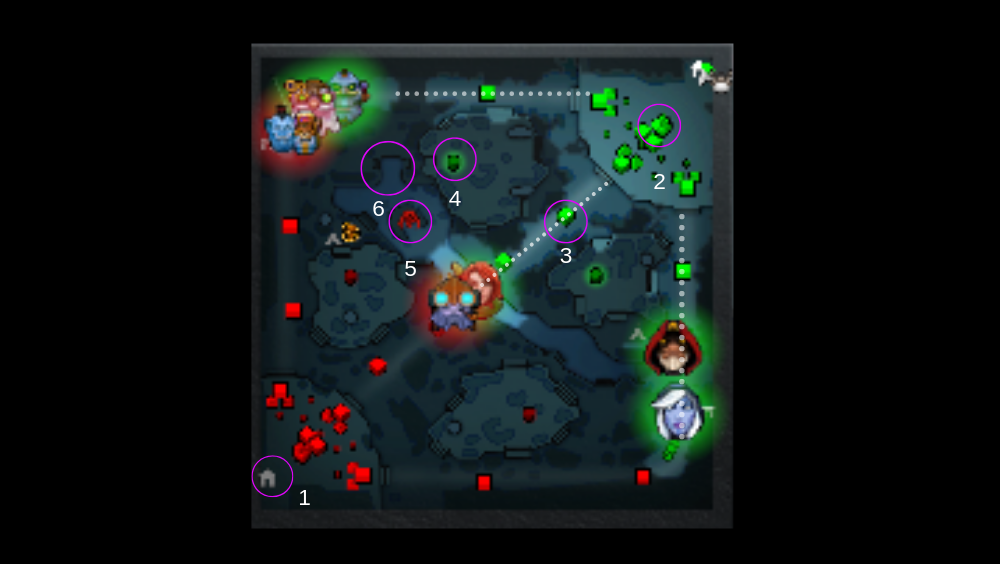 As displayed in the mini-map. There are 2 sides; exactly same in structure, The left is known as; Radiant, whereas the Right side is known as Dire. However, you can randomly be at any side in the game represented by the Green colour and your opponents as Red.

The small ‘Home’ icon, represents ‘Rejuvilance Fountain’ or in short, your home where you can go for power and mana restoration.

Ancient is as in the biggest of the towers which, if yours, you have to protect and if of the enemies, you need to destroy in order to win the game.

Each lane consists of 3 towers, each side. You have to protect your towers from being destroyed and also have to destroy the enemy’s towers in order to reach the enemy’s ancient and ultimately destroy it to win.

These icons represent Shrines; A place where you can go for a limited health and mana restoration. Shrines may be utilized after use and are available again after approximately 3 to 4 minutes.

There is only 1 Roshan Pit in the game. Roshan is a mysterious forest animal. Which you may kill to gain rewards and ‘Immortality’ more like one extra life.

Located near the shrines are the ‘Rune spots’. Here gold appears after every 5 minutes. There are a total of 4 rune spots, 2 each side.

There are a total of 3 lanes, represented by dotted lines, named: Top lane, Mid lane and Bottom lane. As per the rule, a pair of heroes go top and bottom lane each, whereas only one hero goes mid, to fight the enemy heroes, farm by killing creeps(Enemy units other than Heroes) and ultimately destroying the enemy tower.

The hero icons show heroes whether enemies or allies when pressing ‘Alt’. Otherwise, the enemy heroes are represented by an arrow and allies by an oval icon. 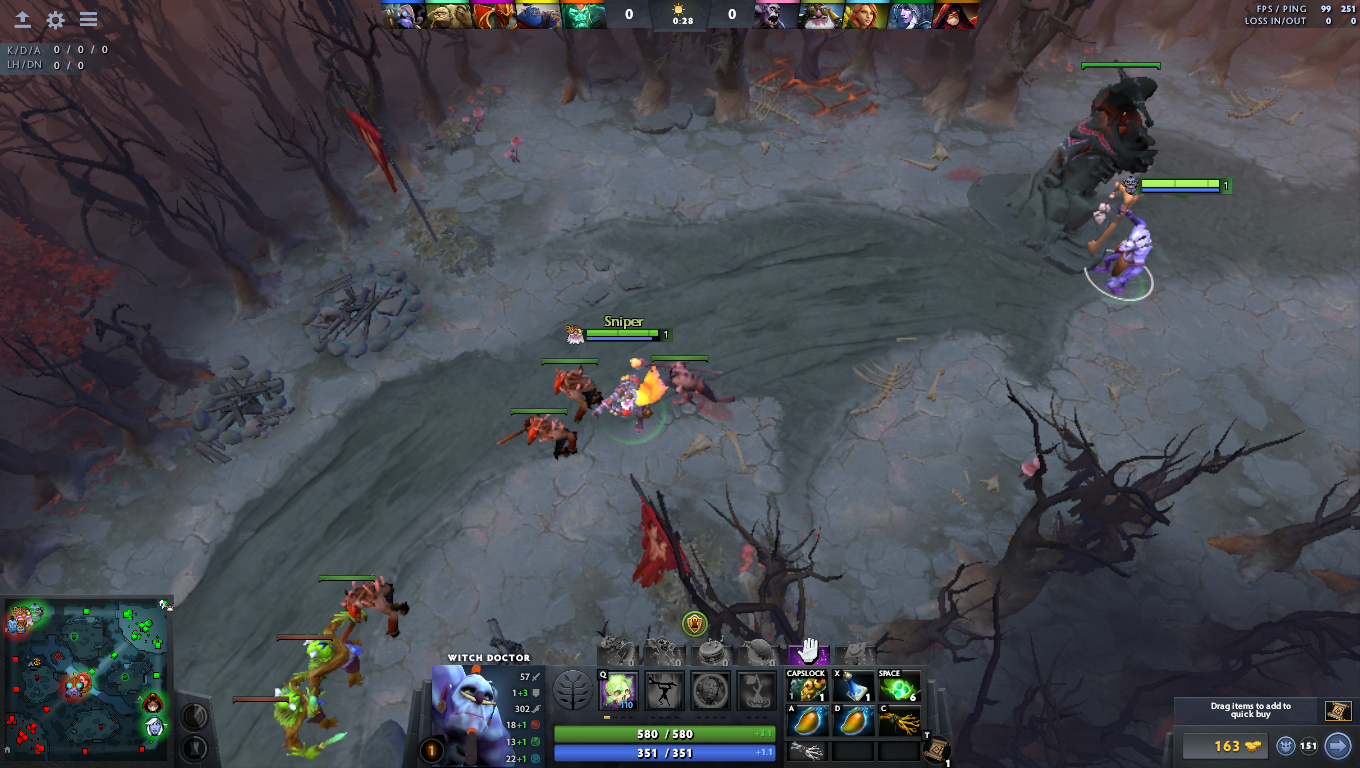 Here are displayed your stats i.e: Kills/ Deaths/ Assisted(How many enemy heroes kills you assisted). In addition to that, you have the ‘Settings’ icon where you can change your controllers any time.

This is your hero. This column displays your health, mana, abilities ( Hover over them to know about them in details) And the items your hero holds.

This is the item shop. Displayed here is the amount of gold you have with which you can purchase items and create a hero’s build. Click on the gold and the following slider appears. 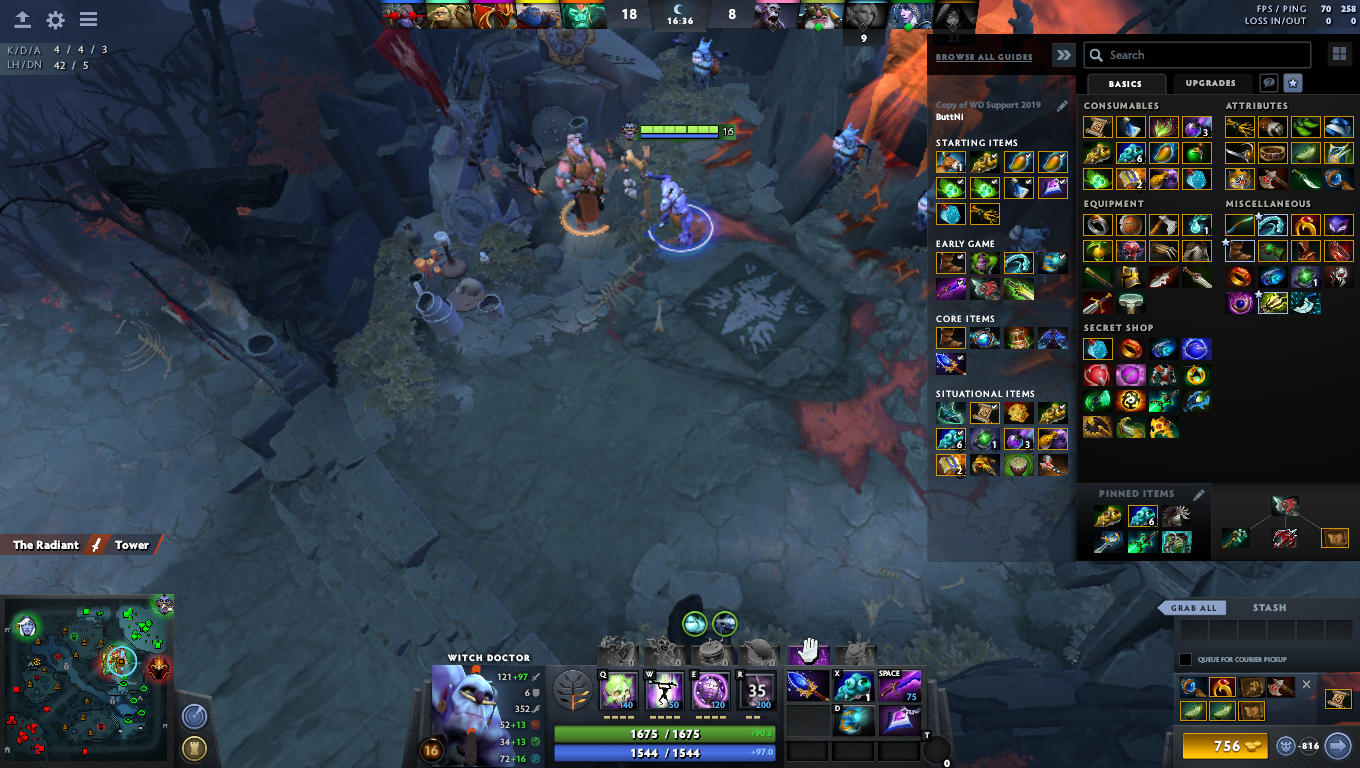 Hover over the items to know their use, right-click to purchase and your items will be delivered to be via an animal courier in a short while. Items can be equipped as you will, but only certain items prove to be best for specific heroes, calculated by the Dota Pros. Search for hero builds and you will know what will work best on the desired hero.

This was all you need to know about Dota 2 as a beginner. Now all you need to do is to get on the battlefield and fight to learn what I haven’t taught and master what you have learnt! Best of luck!

Here are all the blogs of the series ‘Dota 2 For Beginners- A Complete Guide’ for your convenience.

>How To Install Dota 2

>How To Play Dota 2 For Beginners

Next, I will be sharing Hero Builds, Tips and Tricks! Buckle up, for you are on a ride from Noob to Pro.