Are you fond of learning and using new languages and then communicate with your folks in that language? If yes, you might be having some issues specifically if the language you use has some different alphabets and accents that your primary language does not offer. In this case, you can add a software keyboard to your phone by using Android Gboard keyboard

The most versatile and used, Google’s standard Gboard Keyboard includes multiple languages keyboards. The company revealed that it offers 500 languages over 50 writing systems that are totally different. If you have primarily installed Gboard, it might support the language of the area where you are residing however it’s very easy to add one or more keyboards and switch from one language to another according to your choice.

How to switch languages using the Android Gboard keyboard?

So if you are looking to install and use more than one keyboard with different languages, here’s what you can do.

First of all, you need to go to the “languages” page. 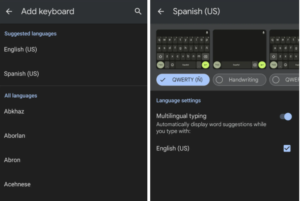 Were these helpful? let us know in the comments section below.

Also Read: How to create Emoji Mashup Stickers on Gboard?