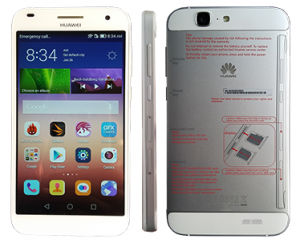 Huawei, with its successful releases of smartphones one after the other has launched another package for the people that has bundle of smart features and all are integrated in a slim module with just 7.6 mm slim body with 5.5 inches display, thus customers don’t have to wait for a smarter phone now. The huawei ascend G7 supports HD Graphics and with its IPS LTPS display, it gives a better sensation to the eyes as do the all-metal back provides a premium feel in the hand and the unique flowing curves and ultra-slim body give the design elegance, balance, and strength.

The device is powered with QualComm processor with model: Snapdragon-410 with Quad core technology and 1.2 GHz speed. This much processor is sufficient enough for the smooth performance and difficult operations tackled by the device.

The device contains dual cameras and every aspect of Huawei Ascend G7 has been improved to make it easier for the users to create amazing pictures. The optimized camera software, including quick capture function, front-facing panorama feature and facial-enhancement capabilities give you results that will make the G7 as essential companion for your life in motion. The camera has the following features.

The device has 13 Mega Pixels rear camera, fitted with:

All these supported hardware can help for shooting HD video, capturing a stunning portrait or looking for the perfect panoramic selfie and provides crystal-clear details. The picture details for the rear camera are 4208 * 3120 while 1920 * 1080 in FHD mode.

The capabilities of the rear camera are:

The following gallery shows the different packages of functionalities that are embedded in the camera.

One astonishing feature that has been spotted in the device is the battery duration. The device is fitted with 2000 mAh battery. Yet it gives great result and once the battery is fully charged, one will get tired if he/she wants to discharge it with games, videos, internet. As I have personally used it with Skype for two hours with two way video call and the battery consumption was just 15 % that is a great achievement for Huawei.

The interface can be experienced with cool amazing and colorful display as well as can be felt with smooth and sensible touch. The Huawei Ascend G7 has both the packages in this single module. The device has the latest version of Android Operating System 4.4.4 and works efficiently under it. The layouts of the keypad in the calling interface has been used the default one as the keyboard in the msg and mail has been set with the default ones. Changes have been brought in the notification area as it is clear from the snapshots in the gallery below. The themes used are quite attractive and user friendly. Addition has been made in the key lock menu that consists of certain frequently used shortcuts like the calender, the torch, calculator and the mirror along with other menu items.

The real worth of a device comes to the front after it is bench marked. The following free applications are used from the play store to check for the overall performance of the device.

Antutu is a testing tool or testing application that is used to check for almost all the device’s features, hardware and their performance and then it benchmarks it and shows you the value of the approach of your device in points. Antutu checks from IMEI number to the OS and from OS to the functionalities of the camera, CPU, Graphics etc.

3D Mark is mostly used for the graphics and the support of a device in playing games and heavy apps that require great graphics accelerator or some other hardware.

Huawei Ascend G7 Review clarifies that the device is a set of choice for the smart people. A device that gains score better than 18,000 with Antutu and over 2000 with 3D Mark is considered to be a better choice in the bulk of smartphones. Huawei Ascend G7 is efficient enough to tackle complex processes and shows better performance over the GPU, the so called Graphical Processing Unit.