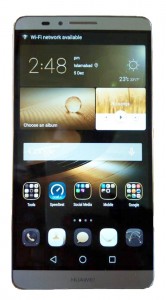 Huawei launches another astonishing smartphone with thrilling display, smooth touch and attractive look with a ton more features and its named as Huawei Ascend Mate 7. The speed, memory and display invites all the professionals and users just like a magnet attracts steel, these all features can make the users inclined to prefer this and is getting reputation and fame. With the release, its sudden fame and attraction became the wondering wish of customers.

Mate 7 supercedes the earlier version that was Mate 2 in many aspects. its 6 inches full HD display  in a slim metallic body of 7 inches fits in the hand with compfort. Integrated with an Octa Core processor with Kirin 925 SoC chipset, no one will prefer to take Mate 2 over Mate3. Never the less, the finger print security lock gives it extra security functionality that other smartphones haven’t yet introduced with such efficiency that all the operations get unlocked with a single touch in just a second. From security point of view, all the apps and fingerprint sensor have been protected with a built-in private security engine. Mate 7 is equipped with Sony’s 4th generation 13 Mega Pixels sensor with 5 lens system. Huawei’s new smartphone Ascend Mate 7 makes you sure that you live your moment.

Kindly check for the complete specifications at the end of this post.

Antutu shows the rankings of Mate 7 and categorizes it to be on the 8th position in the leading smartphones of the world by now. This is a great achievement by Huawei Ascend Mate 7.