Huawei launches a successful successor to the previously launched Huawei Honor 3C which is still a well known and most used Huawei device nationwide. The device was famous for some features like Honor 3C contained 2GB RAM and 8GB ROM. Huawei Honor 3C featured a dual SIM support with SIM-1 specific for 3G and HSPA. The rear cam was 8MP supported with an LED flash light. The front cam in Huawei Honor 3C was 5MP. The battery was 2300 mAh. Last but not the least, the processor was a 1.3GHz Quad core processor and its chip set was of Media Tek. The alterations that have been made in the successor are defined under “Huawei Honor 4C Review”.

Although a lot many changes have been made between Honor 3C and Honor 4C, still there are some similarities between the two which are discussed in detail in the proceeding content.

In the memory section, the first thing we come across is the RAM. Both Huawei Honor 3C and Huawei Honor 4C have 2 GB RAM. Although the technology is different between both devices. The ROM for both the devices are 8 GB and both can be expanded up to 32 GB. The internal ROM for Huawei Honor 4C is manufactured by SAMSUNG.

The above mentioned were the similarities in a couple of aspects. The rest of the things are the positive alterations being made in Huawei Honor 4C discussed in details below.

Although the look of Huawei Honor 3C and Huawei Honor 4C is the same and you may not distinguish between the two from a distance. The dimensions are a bit changed and the camera position and battery has been fixed in Huawei Honor 4C.

The dimensions for Huawei Honor 3C are 139.5 x 71.4 x 9.2 mm and the weight for Honor 3C was 140 g which is quite lighter than 4C. By the way, this change is due to the betterment in the items of the device and the increase in the battery capacity. 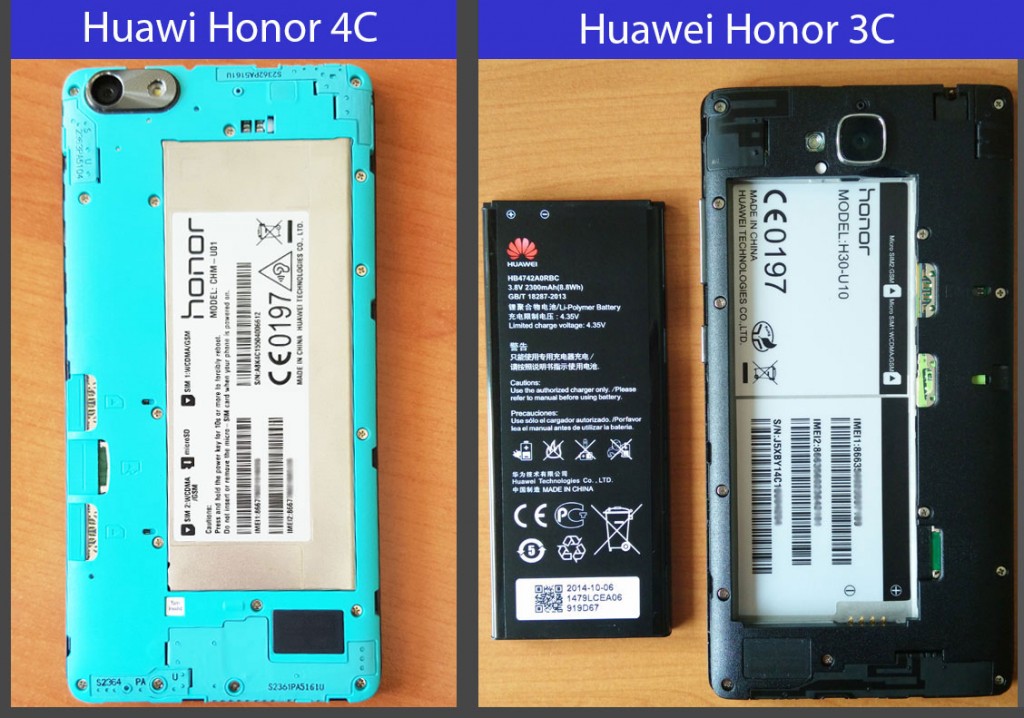 After checking our Huawei Honor 4C for a complete day and taking the results for the battery. You will be surprised to see that the device consumes the battery at a very low rate and proves the claim of Huawei that it works up to 20% more with its battery and with its unique battery management technology. Although there is a slight variation in the standby mode weather the screen is ON or Off. The battery sweeps down with a slight curve which shouldn’t be the case otherwise. The battery shouldn’t be consumed at this rate in the standby mode. Huawei should focus upon this issue or this may cause a drastic decrease of fame in the market.

Honor 3C was launched with a Media tek processor with 1.3 GHz speed and were 4 cores in total (Quad core). The chip set for the device was MT6582.

Honor 4C on the other hand has been launched with Huawei’s home made HiSilicon Kirin 620 processor. The frequency of its processor is 1.2GHz with 8 cores in total(Octa-core).

The rear camera within Honor 3C was 8 MP and the dimensions were 3264 x 2448 pixels, auto focus and supported with an LED flash. The features in the camera were Geo–tagging, touch focus and face detection, panorama and HDR as well. The camera was able to take videos in 1080 pixels with up to 30 fps. The front cam was 5 MP.

The rear camera for Huawei Honor 4C is changed and has been increased up to 13 MP keeping the user’s choice. The dimensions are 4208 x 3120 pixels, auto focus and supported with an LED flash. The features for the Honor 4C are Geo-tagging, touch focus, face detection, panorama, HDR. The smashing camera can capture videos in HD mode with 1080 pixels with up to 30 frames per sec. The front camera is 5 MP but has the power to capture videos with up to 720 pixels.

Experiencing the external shape with in Huawei Honor 4C Review:

Huawei Honor 4C has been launched with a slightly better shape in accordance to Huawei Honor 3C. The camera at the back has been adjusted to the left side. There was an issue in Huawei Honor 3C and that was the lack of lights under the menu button area. The problem prevails in Huawei Honor 4C. Although button icons have been made with nickle but with no lights again and the issue survives.

Huawei Honor 4C has a smart and decent look, you can have a look at the images below. The back side is nicely patterned with lines with in its plastic cover. The camera has been given the top most left corner.

As Huawei Honor 4C is launched with Android OS 4.4.2, the interface is the exact same thing as that of Huawei G7. The background and the icons are very much close to the interface of G7.

The interfaces for making text and dialing number with the dial pad are shown in the first two snapshots. The third snapshot is about the storage area and the amount of space left for installing apps, games and storing media files in the phone memory. The last snapshot shows the battery and the amount or capacity left in the battery.

Huawei Honor 4C was checked with different apps for its performance. The CPU, GPU, Controls, Camera quality, display Quality and all tests have been made and the device is further bench-marked with the standards to check the real worth of the device in our “Huawei Honor 4C Review”.

As expected from an Octa core processor, Huawei Honor 4C got above 30 thousand points which is far more than the 19 thousand score of Huawei Honor 3C with Antutu. That’s the difference between a Quad-core and an Octa-core processor.

Watch also for the points of Huawei Honor 3C with Antutu.

CPU-Z is a free app in the play store that checks for the overall performance of the device and its information. Salient features have been mentioned that includes the performance of CPU, system information, Sensors, battery and all others. Consult the images below.

The device in the below images have been bench marked with three different smartphones which are:

The one with name of CHM-U01 is our Huawei Honor 4C device. Consult the images for detail.

GPU bench marking application is a tool that checks for the performance of Graphical Processing Unit and the points taken with its normalized resolution. The device has been compared for its graphics with the recently launched smartphone known as Huawei P8 LITE. Huawei Honor 4C is far more better than Huawei P8 LITE in its graphics.

The below games were played with our Honor 4C with smart and smooth performance, fast loading, better graphics in 1280*720 pixels and last but not the least are the controls that were fluent and better executed by the smartphone.

In the detailed “Huawei Honor 4C Review”, we came across a point that the device has much more and far more better than the prior launched Honor 3C. The price is just a thousand rupees greater than the Honor 3C but the changes have been a hell more. The processor has been doubled and is Huawei’s own home made processor. The camera is increased from 8MP to 13MP. The battery is changed from 2300 mAh to 2550 mAh. The shape has been modified and given a better shape that looks cool with its patterned back cover.

So don’t wait a second to grab your Honor 4C, if you were waiting for a device better than Huawei Honor 3C with better specifications throughout and in that price range.