Huawei Mate 20 Lite Images- These are the three colours

Tough Samsung has resisted Apple notch, but Huawei continues to be a part of the Notch race by incorporating a pretty notch.  The press images of the Huawei Mate 20 Lite revealed a new colour option- Blue, Black and Gold. Mate 20 Lite previously leaked with Rose Gold version dubbed “Sakura Pink.”

TENAA revealed most of the specs for Huawei Mate 20 Lite:

According to certain rumours, there will be two version of Mate 20 Lite, one will come with an under display fingerprint reader. 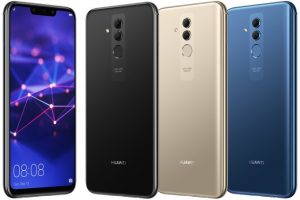 If it would be the cheapest Mate 20 series phone, it would still be expensive than nova 3i that costs €300. The price of Mate 20 is expected to be €400 however the specifications are far much better than Nova 3i.

Mid-range Huawei Mate 20 Lite is covered in glass (back and front) and features metal frames. It will be available in late August for €400/$400.