An IFA attendee decided to casually use his prototype unit around the show floor. He was wearing a branded wristband. So, by judging that we assumed that he might be affiliated with Huawei in some official capacity. By looking at the thickness of the case and the setting in the shots, we doubt that the sneaky appearance was intentional. 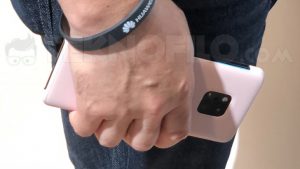 The photos provide a surprising amount of detail about the upcoming phone. Firstly, it confirmed the design leaked by XDA. The smartphone features a triple camera setup, arranged in a very distinct square module, just like the one featured in some recent XDA renders. It has given more credibility to XDA leaks. So, now it can be expected that the rest of the XDA leak will also be true. 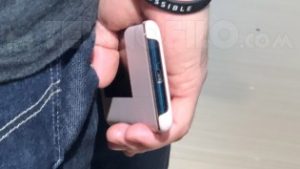 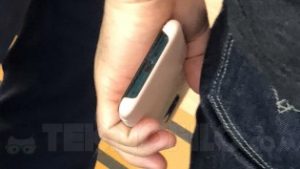 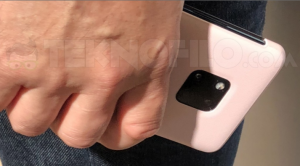 Huawei’s regular Mate 20 will follow in the footsteps of last year’s Mate 10 Porsche Design. The upcoming smartphone will feature Huawei’s Kirin 980 along with 6GB of RAM and 128GB of internal storage. The handset will sport a large 4,200mAh battery that will be keeping the lights on. It will sport Android 9 Pie straight out of the box complete with the EMUI 9.0 overlay on top. According to XDA leaks, the Huawei Mate 20 may have the specs shown in the picture below. 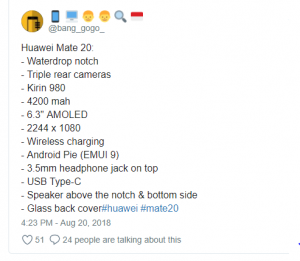 The smartphone will launch on October 16. Let’s see what comes next ahead of its launch.