We have been listening to different rumors about Huawei Mate 20 & Mate 20 Pro almost on regular basis. Moreover, now it seems that there’s not much mystery left in Huawei’s October 16 event. The reason is that we’ve come across most of the key specs, features, and even prices of the duo. Recently, Huawei Mate 20 Press Images Showed up. They unveiled the complete design of the upcoming smartphone.

The appearance of the smartphone seems pretty similar to Mate 20 Pro. However, there are a few key differences. First of all, the wide notch on the Mate 20 Pro is replaced by a smaller waterdrop-styled one. The reason is that this model doesn’t need to house all that 3D face sensing tech the Pro model boasts.

According to the press images, the smartphone will boast 1080 x 2244 pixels resolution and a 6.43-inch diagonal. So, it’s true that the regular Mate 20 will have a bigger display. Another difference that is quite obvious from the images is the camera alignment on the back. The regular Mate 20 model will have LED flash on the top right corner of the square-shaped triple camera setup as compared to Mate 20 Pro which will have the LED flash in the top left corner. 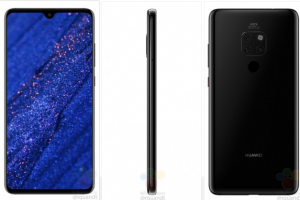 According to the previous reports, both devices will be the first Kirin 980-powered smartphones and will maintain the company’s dedication to AI features. Huawei promised 46% faster and 178% more power-efficient GPU. The new Mate 20 phones will have CAT 21 LTE modem that can go as high as 1,732 Mbps. Moreover, the Mate 20 phones will likely have the same 40 MP + 20 MP B/W + 8 MP tele setup.
We are not sure about all the specs as there have been no official words by the company except the teasers. Hopefully, we don’t have to wait too long as the Huawei Event is quite near.