We all know that Huawei Mate 20 Pro is an absolute BANGER. It is considered to be the king of all smartphones due to its monstrous performance and Wide Angle Camera lenses. The smartphone is perfect for workaholics, gamers, photography addicts, or just anybody that can appreciate a really good piece of technology. It was launched back in October and now the company is prepping to launch its new variants in the Fragrant Red and Comet Blue colors. Even though, Huawei Mate 20 Pro Fragrant Red Variant surfaced on Weibo too.

The fragrant red version recently appeared on Weibo. In addition to that, there are celebratory graphic ornaments around it which shows that its launch seems imminent. The smartphone variant is highly likely to debut on February 5, the Chinese New Year. The fragrant red variant was spotted on Weibo, however, the comet blue was seen in the source codes. 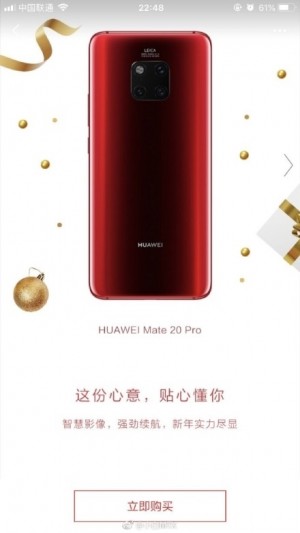 As per the specs, the Mate 20 Pro comes with the Kirin 980 chipset. Moreover, the device has a 6.39-inch notched touchscreen with an under-display fingerprint sensor. At the top of the device, there is a notch and it houses a selfie camera of 24 MP with a face unlocking IR laser. At the back of the device, there are three cameras consisting of a 40 MP + 20 MP + 8 MP setup. The main 40 MP sensor has a f/1.8 aperture, while 20 MP cam is a telephoto unit and has a f/2.4 aperture, and the 8 MP sensor is ultra wide-angle.