From the last few days, we are getting certain updates regarding the upcoming flagship Huawei Mate 20 & Mate 20 Pro. Moreover, the company has also been teasing Mate 20 series. Huawei Mate 20 Pro renders also revealed many of its key specs and features. Recently, the upcoming phone became a victim of a spy shot on some subway car. The blue model version caught live on the subway confirmed its tri-camera setup placed in a square surface. Furthermore, Huawei Mate 20 Pro Shiny Glass Back appeared to be a bit greasy with smudges.

The back of the smartphone clearly shows the tri-camera setup placed on a square surface. The only ho-hum part about the appearance of the Mate 20 Pro is that the shiny glass surface seems to be a fingerprint magnet with all greasy smudges all over it. However, it may be possible that the pre-production sample doesn’t contain the oleophobic coating. 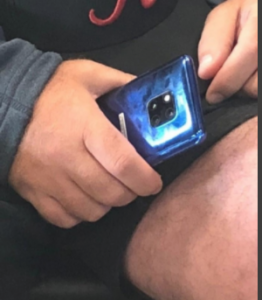 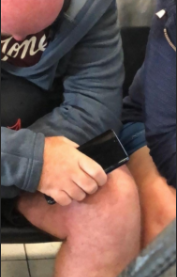 The handset will have a display that is curved to the sides. Reportedly, it will feature a 6.4″ OLED QuadHD+ display. Moreover, the Huawei Mate 20 Pro will be the first device to use Company’s new HiSilicon Kirin 980 CPU, Huawei’s first CPU with the 7nm process. It is also to be expected that the powerhouse will carry larger than 4,200 mAh battery. It will come with the crazy fast wired charger that pumps the phone full of electrons at the rate of 70% for 30 minutes. The new triple camera setup may drop the monochrome sensor for a wide-angle RGB sensor. The camera lens will have up to 5X zoom. However, users will be able to switch between a standard and wide-angle camera.

The smartphone will be revealed on October 16 at Huawei’s launch event in London. Let’s see what comes next ahead of its launch.