Huawei is launching some great devices and as far as their cameras are concerned, the Chinese company has made some extra effort it providing users with high-end cameras even in mid-range devices. This is the reason that Huawei Mate 40 Pro+ is able to secure the highest rank in DxOMark Smartphone Camera Rankings. The Chinese smartphone manufacturer has got 139 points, which are the highest when it comes to camera testing.

The flagship device has secured 144 scores for the photo, 98 scores in Zoom and 115 in video categories. This primary sensor of the smartphone has 50-megapixel wide-angle with f/1.9 lens, a 20-megapixel sensor with an ultra-wide-angle f/1.8 lens, and a 12-megapixel third sensor with an f/3.4 telephoto lens. Apart from that, the device also includes 8-megapixel SuperZoom camera featuring 10x optical zoom and f/4.4 aperture, along with a 3D depth-sensing camera.

DxOMark has reviewed the Huawei Mate 40 Pro+ camera and has termed it as the “King of Camera”, as it secured a total 139 points which is the highest score ever achieved by any device. Due to the extraordinary camera, this device is able to surpass Huawei Mate 40 Pro, Xiaomi Mi 10 Ultra, Huawei P40 Pro and iPhone 12 Pro max. 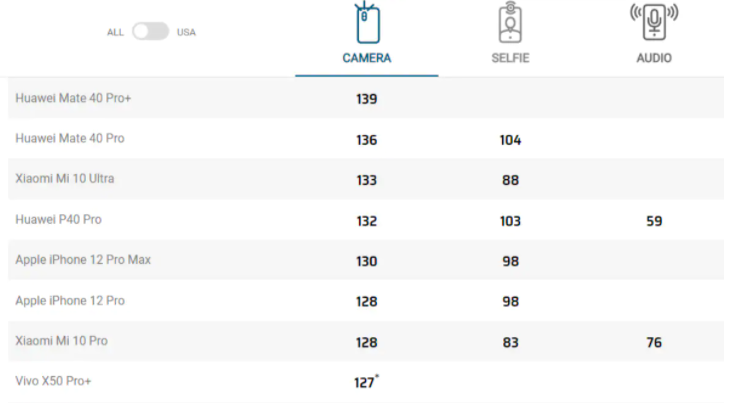 DxOMark has revealed that the reason for giving the highest marks to Mate 40 Pro+ is its accurate exposure and a wide dynamic range. The review reads:

No doubt, Huawei is producing some great devices these days and it is evident from its ever-growing popularity and such rankings. The mobile phone these days is something more than making calls. With the world getting connected and growing social media platforms for sharing your memorable moments in terms of pictures, a good camera device is a necessity these days. So if you want to buy a good camera device, go for the king of cameras.