The mid-range Nova series have endured turbulent two years in the market and now Huawei has churned out their latest smartphone “Huawei Nova 3” with a flagship Kirin 970 SoC. Huawei Nova 3 has launched in China introducing several flagship features. The phone features a display notch, the Kirin 970 SoC, and visually striking color options. One of its notable features is the Huawei’s GPU Turbo, which increases performance while playing graphically-intensive games. It might have powerful internals, but the Huawei Nova 3 is all about its four cameras.

The phone features dual 24MP and 2MP cameras on the front and dual 24MP and 16MP cameras around back. The Kirin 970 chipset brings its neural processing unity (NPU) with it. This NPU allows both camera arrays to use Huawei’s AI-enhanced features. The front cameras can recognize and enhance up to eight scenes and objects. On the other hand, the rear cameras can detect and enhance up to 22 scenes and objects. The camera arrays also detect your face and apply adjustments using beautification algorithms. This new feature will be more attractive for the Asian people of the East.

The front cameras can be used with the phone’s face unlock feature which can work in lighting condition with an infrared sensor. The front cameras don’t deliver the portrait selfies only. Huawei has also introduced 3D Qmojis, which mimic your facial expressions and look absolutely cute. Let’s have a look at that. 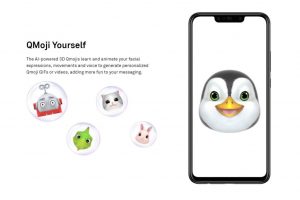 There are a lot of new interesting features in this new handset that makes it different from the other phones of the series. You can grab the Nova 3 in China for 2,999 yuan. Although, there is no word about the availability of this phone in the other markets right now.