Huawei keeps on introducing new handsets as per users’ requirements. Huawei also made real progress with its own fast-charging solution. The latest 40W capabilities are likely to be available in its upcoming Series, Nova 5 series. In addition to that, the smartphone maker is prepping to launch another handset dubbed as Huawei Nova 5i. A few weeks back, the handset appeared on AnTuTu. Recently, it surfaced on Geekbench with 6GB RAM.

A few days back, the handset appeared with 4GB RAM. However, now the phone popped up with 6GB RAM. The 4GB RAM variant sports model number GLK-LX3 while the 6GB RAM model comes bearing model number GLK-LX2. According to the latest reports, the phone runs Android Pie and is powered by an octa-core processor with a base frequency of 1.71GHz. 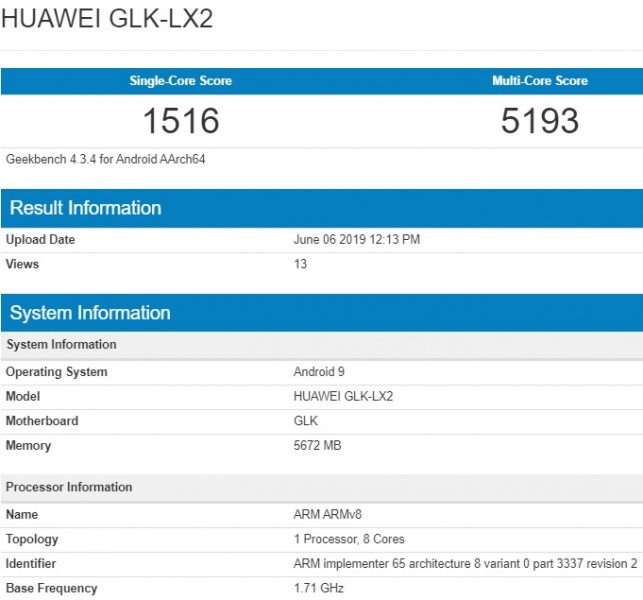 According to the Antutu listings, the phone will be powered by the Kirin 710 chipset. It will come paired with 6GB RAM and 64GB storage. Moreover, the screen resolution will be 2310 x 1080. The Nova 5i will also feature a punch hole in LCD for the selfie snapper. The handset will run Android 9 Pie with Huawei’s EMUI skin on top straight out of the box. Furthermore, the phone will boast a 3,900 mAh battery to keep the lights on. Moreover, the phone may also feature a triple camera setup on the back.

The smartphone is tipped to see the light at the end of this month. Let’s see what comes next ahead of its launch. Till then, stay tuned for updates.