According to the latest report released by the International Data Corporation (IDC), Huawei and Oppo made a place among the top 5 smartphone makers. Both the companies replaced Lenovo and Xiaomi who were previously spotted as the fourth and fifth largest smartphone manufacturers. The research firm evaluated the mobile phone companies over their shipments during the first quarter of 2016. The report also identified the reason behind the downfall of Lenovo and Xiaomi. It suggests that the smartphone market has begun to mature enough that consumers are looking at the different options which Lenovo and Xiaomi do not provide.

Huawei gained the third position in the report. According to the report the brand not only continued domestic dominance, but also showed a growing presence outside the China.  The Shipment volume for Huawei climbed from 17.4 million units in 1Q15 to 27.5 million this quarter for year-over-year growth of 58.4%. The recent launch of the P9 smartphone featuring Leica optics provided an additional weapon to combat Apple and Samsung. Huawei with its smart devices like P9, Mate Series, and Nexus 6 is giving tough time to Samsung and Apple worldwide. 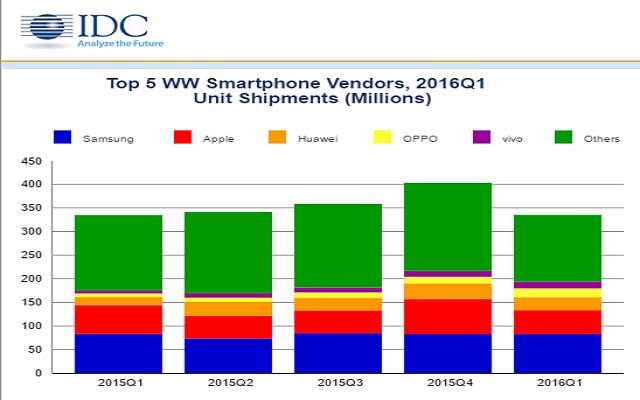 Oppo on the other hand has been shipping smartphones since 2011, focusing primarily on the domestic market. In 2012, it started the international shipping starting from Thailand, then expanding throughout Southeast Asia and more recently to other countries in Asia, the Middle East and Africa. In 1Q16, OPPO’s 18.5 million shipments represented 153.2% year-over-year growth, which is the strongest among the top 5.

Both the Chinese brand Huawei and Oppo are critically challenging many brands by creating a big market share. As the China market matures, the appetite for smartphones has slowed dramatically as the explosion of uptake has passed its peak. In 2013, China’s year-over-year shipment growth was 62.5%; by 2015, it had dropped to 2.5%. According to the IDC research, the average selling price (ASP) for a smartphone in China rose from US$207 in 2013 to US$257 in 2015.

With this mobile market share major shifts, Pakistan will also face some positive changes. As the Chinese market is getting saturated day by day, therefore brands like Huawei and Oppo are looking to Pakistan for the future growth.