Huawei announced the Android 9 Pie Based EMUI 9 at IFA 2018. It is one of the major updates for the Android-Based Operating System. A few weeks back, the Chinese Huawei P20 Series received the latest EMUI 9 Update. Now, we have come to know that EMUI 9 has started hitting the global Huawei P10 Series.

Huawei announced that all the phones that are powered by Kirin 970 will be getting EMUI 9. However, they had no words on the rest of its lineup. Recently, we have come to know that EMUI 9 has started rolling out to the P10 Series as well. 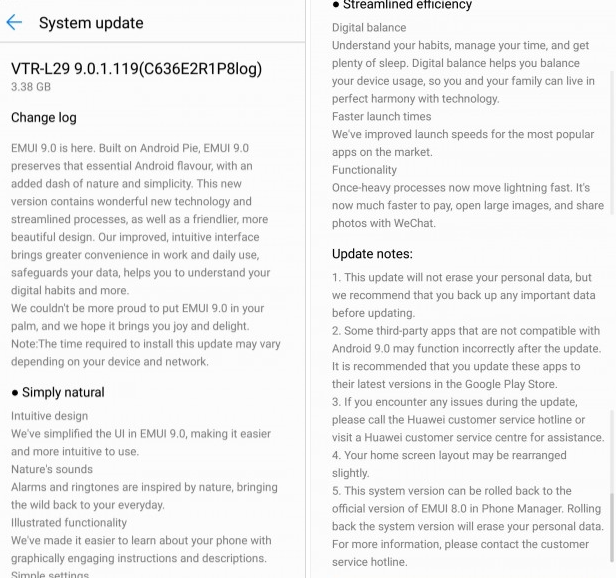 The Android 9 Pie based EMUI 9.0 offers a highly improved user experience.  This performs 12.9 percent faster than its predecessors. In addition to that, it supports faster application launch speeds. For example, EMUI 9 have the capability to launch Instagram 12 percent faster and Spotify 11 percent faster than its predecessors. Furthermore, the update has brought a new user interface for the Huawei P10 Users. It also offers Gesture-based navigation and the “once-heavy processes” are now moving “lightning fast”. However, there is no GPU Turbo. The update also brings new alarms and ringtones which are inspired by nature.

Furthermore, one of the interesting features included in this update is the all-new Digital Balance dashboard. This new dashboard has the ability to track device usage metrics. It allows P10 users to set usage quota for each application. In this way, it helps all the users to relax before heading to bed. Moreover, it also delivers a user-friendly experience. This EMUI 9 has made Huawei one of the first smartphone makers to launch a custom OS that is based on Android Pie. This updated version provides a quality experience to all its users.

In order to get the update on your Huawei P10, all you have to do is to click the Update notification when it arrives. However, If you have turned off automatic updates, then head to the Settings menu, and check out whether the update is available or not.