Huawei P30 Will Be Available For Pre-Sales On March 27

According to the latest information from Huawei official Weibo account, the flagship phone, P30 will be made available for pre-sale at 00:00 on March 27. In addition to that, the company has once again teased its super zoom capability alongside the pre-sale announcement. Let’s have a look at that. 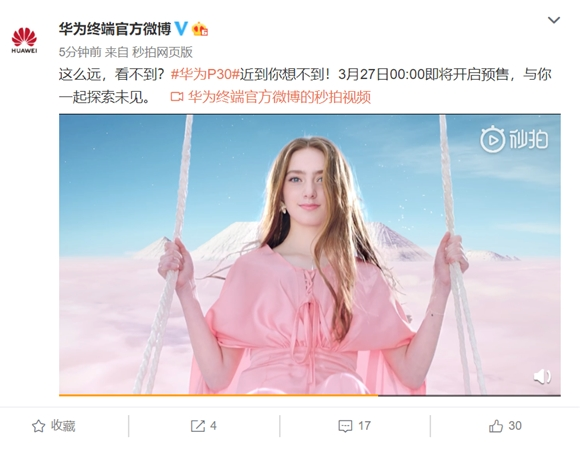 The regular version of the handset, P30 will include a 6.1 inch OLED display featuring a resolution of 1080x 2340 pixels. Moreover, it will boast an aspect ratio of 19.5:9. Along with some same specs as that of P30 Pro, the P30 will sport a tri-camera module on the rear side. It will come with 6GB RAM and 128GB internal storage. Furthermore, the device will come with a 3500 mAh battery to keep the lights on.

If you want to know the Prices Of the Huawei P30 phones then have a look at the table shared below.

The highly anticipated series by Huawei, P30 Series will go official at an event in Paris on March 26th. Only a few days are left in its launch. Let’s see what Huawei offers more to its flagship phones.