Chinese smartphone giant, Huawei is all set to launch P30 Pro. The company has announced that launch event will take place on March 26 in Paris. Huawei has the habit of accidentally revealing details of the device. Just keeping its tradition alive, this time the company’s CEO Richard Yu has revealed the most awaited detail of the device i.e. quad camera setup.

Richard shared some pictures taken from Huawei P30 pro. On the image, one can easily show a watermark that suggests, the device will have a quad camera setup. The images taken from Huawei P30 Pro were shared on Weibo. While celebrating the lantern festival in China, Richard captured the image of a moon that confirms rear quad camera setup powered by Leica. 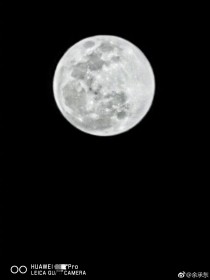 No doubt, Huawei is getting more and more popularity because of its high-end, mid-range and low-priced smartphones. Huawei was working on its P30 series for some time now. The P30 phones have fashion-themed names – Elle, Vogue, and Marie Claire.  Huawei P30 Pro will be the most powerful among the series. The previous leaks reveal that Huawei P30 Pro will come with quad camera setup. Huawei P30 Pro Leaks also revealed an Irregular Arrangement of Quad Cameras.

Now the time will tell whether the cameras will be placed in an irregular manner or not. The device will come with OLED display with waterdrop notch. P30 Pro will be equipped with in-display fingerprint scanner providing more security.  The smartphone will run Android 9.0 pie and powered by Kirin 980 Chipset.