Many smartphone giants are working on foldable phone and it seems that in near future we will be able to see it. Just like Samsung, LG, and Apple, different smartphone giants are rumored to be working on foldable iPhone. There were expectations that Apple will be the first one to launch Foldable iPhone in 2020. However it seems that Chinese Smartphone brand has come first in the race of Foldable Smartphone as Huawei Plans to Launch World’s First Foldable Smartphone in November.

Last year, Huawei CEO Richard Yu said that the company has a working foldable phone that could be released in 2018. Huawei has also filed a patent application with the World Intellectual Property Organization (WIPO).
Few days back Huawei Foldable Phone Patent Leaked. The patent was published by that organization, and includes images of what Huawei has in mind. No doubt, Huawei will be the first OEM to have a truly foldable smartphone in their line-up.

The foldable Huawei device is a full-sized tablet. It appears to fold in the middle to become a smartphone. But there is a “small gap” between the two screens when they are opened in the tablet position. However, the company is working on it to remove this gap. 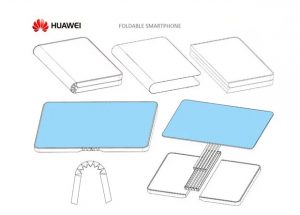 There are rumors that Huawei’s foldable phone will be showcased in November, but apparently it won’t go on sale until the company receives feedback.  Huawei will most likely incorporate the suggested changes and then release the final model, which means it may not actually be available until 2019.