Chinese smartphone manufacturer, Huawei has recaptured its market share during the Q1, 2017 while boosting its share to 18%. Huawei has increased its shipments to around 25% year-on-year in order to struggle and regain its market share which was previously lead by OPPO. Huawei Regains Lead in Chinese Smartphone Market in Q1, 2017.

According to Canalys, Huawei has been on second place, after OPPO, during the last two quarters of 2016. During the first quarter of 2017, Huawei successfully shipped 21 million units in the country.

Canalys shared the following chart indicating the compassion of Q1 of 2016 and 2016. 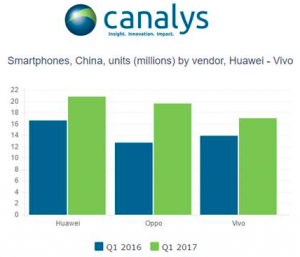 Whereas OPPO has also increased its shipments during Q1, 2017 to 55% year-on-year in Q1 but still it fell to 2nd place with just under 20 Mn units shipped.

Vivo preserved its 3rd place in the chart with slowest growth rate of 23% and captured only 15% share on the shipments of 17 Mn units.

The overall Chinese smartphone market has continued to expand in the Q1 of 2017 along with rising penetration. Canalys estimated 114 Mn smartphones being shipped in China during Q1, 2017, while witnessing an increase of 9% on year-on-year basis.

“The top three vendors are pulling away at the head of the market, accounting for more than 50 per cent of shipments for the first time this quarter.”