The device comes with GPU Turbo and Night Mode update that allows users to take night pictures without a tripod out of the box. 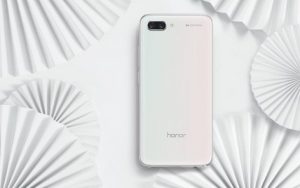 The Honor 10 GT comes with a 5.84” tall screen along with a notch on top. The device carries Kirin 970 chipset with AI capabilities for machine learning and delivering power to the most used apps.

When it comes to the camera section, Honor 10 GT camera setup on the back is dual – a 16 MP main snapper and a 24 MP monochrome sensor, both of them with f/1.8 aperture and PDAF. dual. It comes with the latest GPU Turbo and tripod-free Night Mode update out of the box.

Honor 10 GT was first appeared in May. After two months of its release date, in the month of July it has been sold in 3 million units across the world. The price of Lily White Honor 10 GT will be CNY3,299 ($484/€414), the same as the Phantom Blue option. The device runs Android 8.1 (Oreo).