As a result of U.S. ban, Huawei smartphone shipment declined in the final quarter of 2020, sending the once No. 1 seller in the world to slip behind rivals like Apple.

According to data released by Counterpoint Research on Thursday, Huawei smartphone shipment reported 33 million devices globally in the final quarter of 2020, a 41 percent year-on-year fall, placing its market share at 8 percent.

That made Huawei, behind Chinese rivals like OPPO and Vivo and far below Apple and Samsung, the sixth biggest smartphone maker in the world. 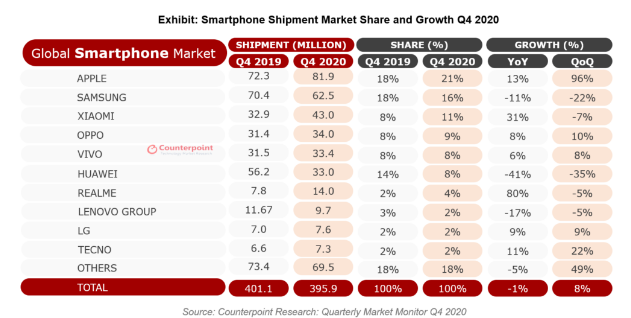 In the fourth quarter, Huawei delivered 32 million smartphones, down almost 43 percent from last year. It is the first time in six years that Huawei has fallen out of the top five, Canalys said.

“Huawei has always been loyal to creativity and dedicated to creating more value with great products for customers. Our smartphone business has grown strongly over the last year, and there has been substantial growth in tablets, PCs and wearables. We remain optimistic about the future”, Said company spokesperson.

The greatest impact of that was slicing off Huawei from the Android operating system. In China, where Google services such as Gmail and search are disabled, that is not a big deal. But it has been the secret to Huawei’s success in international markets as customers are used to these services.