No doubt Huawei are better smartphones that are reliable and can be trusted for both the hardware as well as for the OS part. The optimization part of the OS is fantastic that works for long even with low specifications relatively and with low capacity of the battery that for sure works for longer time than almost every other smartphone in the market. Huawei Y5 Review shows nearly all the specifications, features, compact design, gadgets, quality, bench marking, OS and reliability. 1GB RAM along with 8GB ROM and a Quad-core processor for an average smartphone is a better combination and when it is been built by a reliable company like Huawei, then there is no match for it. The power of the Rear camera along with the snapshots have been given below that is able to capture images in HD mode and the size reaches over 4MB with dimensions as (3264 x 2448 pixels).

Some fast specifications of Huawei Y5:

The weight of Huawei Y5 is almost nothing with its compact shape and relatively stuffed battery with low capacity of 1730 mAh. The dimensions are also better and one can have a full control of his/her Huawei Y5 in his hands. 1GB RAM and 8GB ROM along with a 1.2GHz Quad core processor that keeps the device fluent and One can surf fast 3G internet with HSDPA supported technology.

The display is made up of TFT LCD technology with 4.5 inches display. The resolutions are 854 x 480 pixels which may be able to play the normal videos with MPEG, MP4 formats but you may not be able to play the blue ray or movies with full HD format. As the processor is of Spreadtrum with chip-set SC8830 so the expected display will be Mali-400 MP. The density pixels per inch are 240 and the screen has up to 2 points multi touch support. Consider the graphics of the game in the ant smasher game in the image below.

The memory is 1 GB RAM and 8 GB ROM. The secondary memory can be extended to 32 GB with a memory card. 1 GB RAM is normal for an entry level smartphone with all the necessary specifications that is already been installed in the Huawei’s newly launched smartphone, The Huawei Y5.

Huawei Y5 is fitted with a true rear cam of 8MP that takes snapshots in HD and the size may reach up to 4.10 MB and the dimensions for the images taken with the rear cam may be up to 3264 x 2448 pixels as shown in the image below. 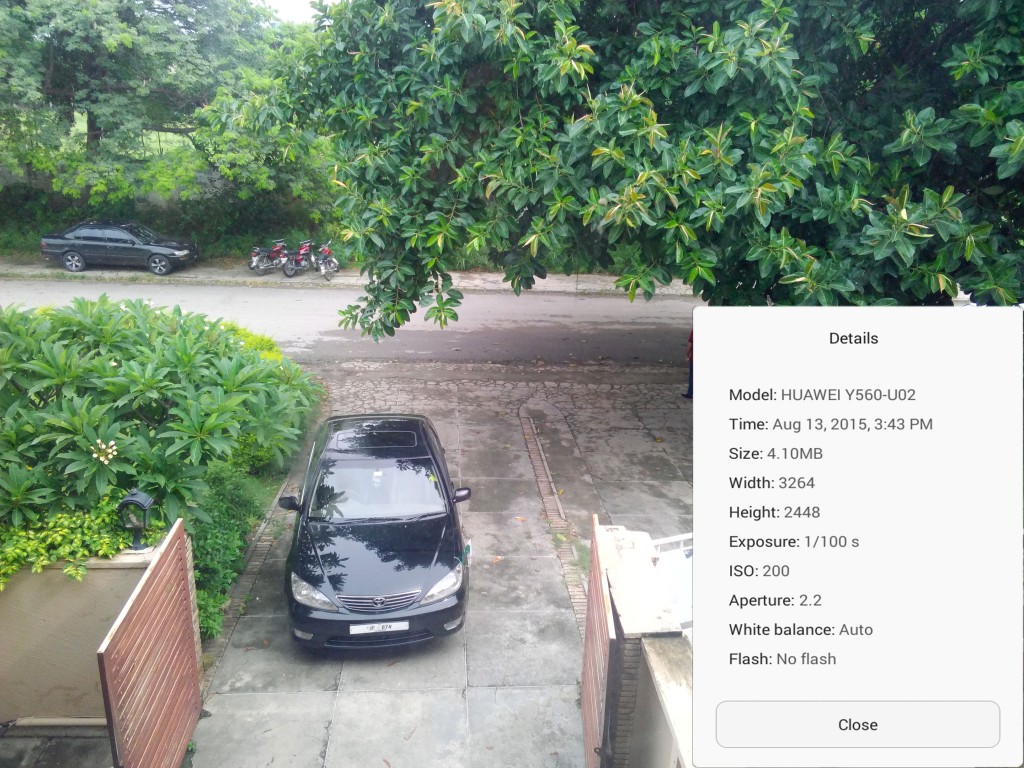 The front camera which can also be called as selfie camera can take photos with dimensions of 1600 x 1200 pixels. The power is 2MP and the size may be to 1 MB. So you can have social media chit chat with your closed ones with a full screen and with smooth and reliable video. The original image taken with the selfie 2MP camera of Huawei Y5 is attached below. 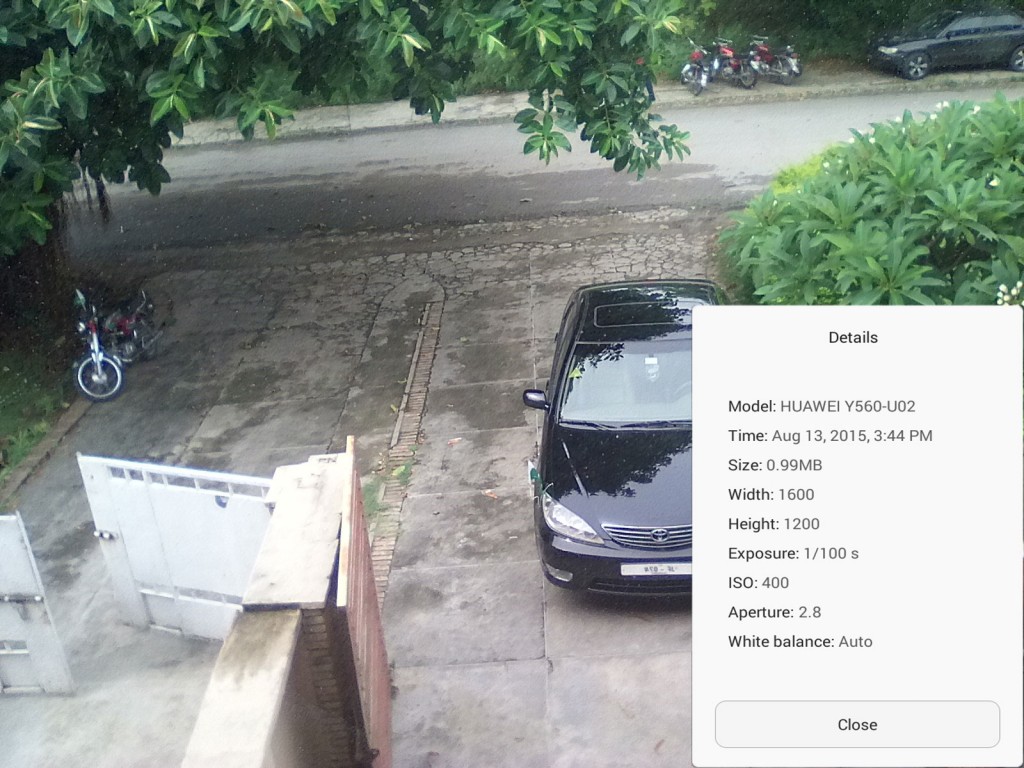 Huawei Y5 is a 3G enabled smartphone. The smartphone can support the HSPA and HSDPA bands which are the advanced bands of fast 3G.

Huawei are best with their batteries and they can extend the battery life with their powerful and fully managed OS. The OS is customized by Huawei and the battery is kept at its optimum when the smartphone is in the idle position. Other thing is the EMUI controlled OS by Huawei. The capacity of the battery fitted in Huawei Y5 is 1730 mAh, yet the duration is better than most of the brands in comparison. The internal storage by default is 8GB and it can be extended to 40GB by extending the internal memory with a microSD card of up to 32GB limit.

If you are resident of Pakistan, You will also get Zong 4G internet for a period of 6 Months with a limit of 1 GB internet for one month each. This is indeed an exclusive offer by Zong. The internal of the box contains a charger, a USB cable and a normal earphone along with the amazing smartphone as shown in the third and the fourth snapshot. The Huawei Y5 is a handy device that fits quite well in the palm of your hand and amazing thing is the 4 inches display which comes under your thumb and all the corners can be touched with the thumb with ease.

The handy smartphone Huawei Y5 is shown in the snapshots below. The device has a free 6 GB fast internet by Zong as shown in the first snapshot. The second image shows the bottom of the smartphone which is smooth and the bezel is crystal clear and perfectly polished with jet black color and a small hole for the mic at the side. The third and fourth images show the sides that contains the power button along with the volume up and volume down keys. The last image shows the charger jack and the 3.5 mm audio jack that are present at the top edge of Huawei Y5.

The interfaces for all Huawei devices are nice and smooth and the icons have been well optimized along with the layouts that are well managed. The drop down menu consists of dual mode, one is the notifications menu that contains the notifications and the other being the switch menu that contains of all the shortcuts for WiFi, data, Location, Bluetooth and other necessary menu items. The OS is customized by Huawei, also called the EMUI interface which has been molded to work better along with the hardware as shown in the snapshots below.

The keyboard layout is the most easy and generic one as shown in the third snapshot below. The touch of the keypad is smooth but all you have to do is to be a bit sympathetic with it because you may see the alphabets a bit shorter than the time, the keyboard key is clicked. The dial pad is easy and user friendly and one thing that I like in Huawei devices is the keypad been linked with the contacts and messaging menus. You just swipe the layout and you are taken to the next activity.

The overall performance of Huawei Y5 after been benchmarked with some of the standard brands was better and with this price of just rupees 11,000/- you are getting a better smartphone.

The Spreadtrum SC8830 Quad core processor along with 1GB RAM and 8GB ROM takes Huawei Y5 to a maximum in the column of entry level smartphones with these basic specifications. A score of over 19000 by Huawei Y5 is a better total with Antutu as shown in the snapshots below. The device comes below Xiami MI 2 which was a heck of its time.

After checking Huawei Y5 individually for its single core, Multi core and Chrome browser’s performance, the results were average and better for an entry level smartphone with all the basic specifications as shown in the snapshots below. For its metal part, the Y5 is leaded by Meizu MX 4 which proves the better performance of Huawei’s Y5 processor’s single core speed which is clocked at 1.2GHz. The intra processor’s chips and their mutual interaction is better that is been shown by the score of 1060 taken by Huawei Y6. The score by its browser is average and just in its qualifying scores by smartphones with a Quad core processor. Still it is ranked better than Samsung Galaxy Nexus by scoring 1605 points with Chrome.

Huawei Y5 is an entry level smartphone with all the necessary specifications and all the necessary features like 1GB RAM, 8GB ROM, 4 inches TFT LCD Display, 8MP Rear Camera and 2MP front camera all in just Rs: 11,000/- along with a brand name like Huawei is a better choice.