Huawei launched the Y7 2018 last year and now the company is all set to launch its successor. Huawei Y7 (2019) surfaced on the internet just days before stepping into the new year so, its release seems imminent.

Tipster Roland Quandt leaked the specifications and renders of the Huawei Y7 (2019) on the website WinFuture.de. According to the leaks, the Huawei Y7 (2019) will sport a 6.26-inch HD+ (720×1520 pixels) display along with a waterdrop-style display notch design. It will have a 19.5:9 aspect ratio. Moreover, the smartphone is said to have a 1.8GHz octa-core Snapdragon 450 SoC. The SoC is expected to be coupled with 3GB/ 4GB RAM. Furthermore, the handset will come with a microSD card slot to expand the built-in storage.

In addition to that, the Y7 (2019) will have a dual rear camera setup consisting of a 13-megapixel primary sensor along with a f/1.8 aperture and a 2-megapixel depth sensor. Furthermore, there will also be an LED flash. The camera will support artificial intelligence (AI) backed features such as scene detection. The phone is also rumored to carry a notification LED light between its display and frame. It will be similar to how the notification LED light featured on the Huawei P Smart (2019). Moreover, the Y9 (2019) will have a 4,000mAh battery that will keep the lights on. Furthermore, it will receive the power through an available Micro-USB port. The battery is not expected to support fast charging though. However, the phone can deliver up to two days of battery life once fully charged. 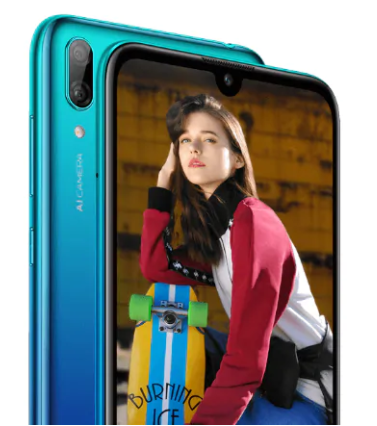 According to the leaks, the new Huawei phone will come to Europe in 3GB RAM/ 32GB storage configuration with a price tag of around EUR 150. However, the Y7 (2019) could also get a Prime or Pro version with 4GB RAM/ 64GB storage option. Let’s see what comes next about the upcoming handset.