The trend “Imported Hakumat Na-manzoor,” which roughly translates to “Imported government, unacceptable,” has become the biggest Twitter trend ever with more than 100 Million people tweeting it. The trend is being used to criticize the “successful regime change conspiracy” and foreign intervention in Pakistan.

The social media trend has become the center of attention. It’s important to mention here that engagement refers to the total number of times a user interacts with a tweet or a post. 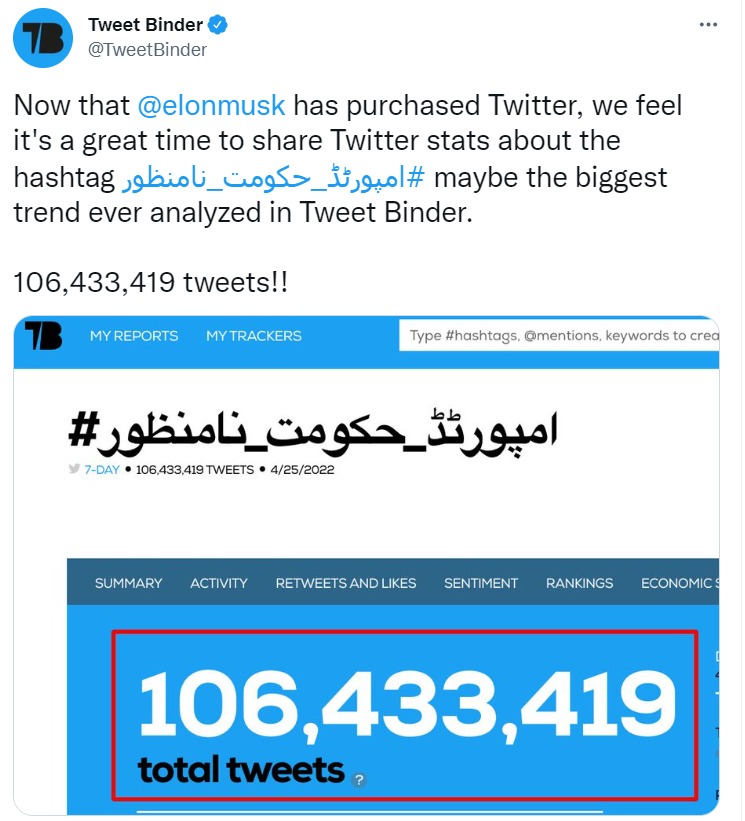 “ImranKhan,” which has been tweeted thousands of times, is another hashtag that has been popular on social media sites, particularly Twitter. The hashtag got a lot of traction in other nations including Turkey. The hashtag began shortly after Prime Minister Imran Khan was removed from office as the country’s chief executive. The opposition ousted the Prime Minister an hour after midnight, with just two votes more than the minimum number of votes to carry the motion. On multiple occasions, Prime Minister Imran Khan has stated the vote of no-confidence motion is a foreign-funded plot. On March 27,  it was the first time he made such a remark in an address to a rally in Islamabad.

PM Khan, amidst the no-confidence motion, waved a piece of paper in front of the public on March 27, saying it was part of a “foreign conspiracy” to destabilize his government. The letter quickly ignited a public controversy, with some taking the prime minister’s word for it while others, including some seasoned journalists and opposition parties, denied the existence of any such letter.