mPolitics will always be counted as an Extraordinary Legacy of Imran Khan!

Imran Khan (IK), a cricketer-turned-politician and a heartthrob, who is leading his party Pakistan Tehreek-e-Insaaf in anti-government protests, oozes charisma that has the ability to sway the tsunami of supporters with a simple endorsement.

Whether commanding a rally of hundreds-of-thousands, giving an interview, speaking to a roundtable of experts or communicating through social media, IK or Kaptaan (now popularly called by his followers) can make a crowd stop and listen attentively.

[success]Imran Khan was born on 5th Oct, 1952 to Ikramullah Khan Niazi and his wife Shaukat Khanum. He received his early education at the prestigious Aitchison College, Lahore. He finished his high school education at the Royal Grammar School in Worcester, England and then went on to study Economics and Politics at Keble College, Oxford, in 1972.
The cricket career of IK isn’t hidden from anyone; he became a world-class ‘all-rounder’ and was rewarded with the captaincy of the Pakistani cricket team in 1981. He was also declared international cricketer of the year in 1989-90 and brought world cup to Pakistan in 1992.
Imran is the initiator of Shaukat Khanum Memorial Hospital, one of the leading institutions for free cancer treatment that has received international recognition.
In December 2005 he was appointed as Chancellor of the University of Bradford in UK. In 2008, Khan’s brainchild, Namal College was built through the Mianwali Development Trust (MDT) which he chairs. The college was made an associate college of the University of Bradford in December 2005. [/success]

Quite recently, we’ve seen the tremendous impact of the internet and cellular technology that brought remarkable gathering of students, professionals, celebrities, politicians, entrepreneurs and civil society activists by PTI as a political party for a transformative change they wanted to see in this country. 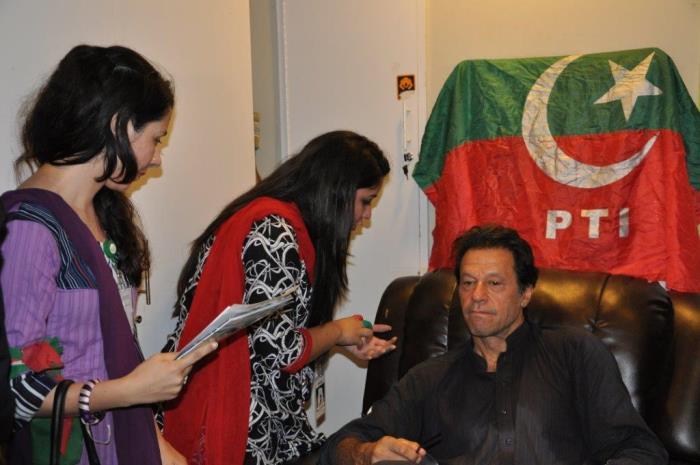 The use of technology on political communication may not be a new phenomenon. However, in Pakistan, the way Imran Khan and his party used effectively mobile technology to mobilize people added a new dimension to politics to be known in the world as mPolitics for years to come.

Patently, IK is popular among Pakistan’s connected youth, which makes him the country’s most-followed presence on Facebook and Twitter. There are about more than 2,873,900 ‘likes’ on official Facebook page for him. Its fans outnumber his party’s official page that holds more than 2,100,226 members. In fact, so pervasive is his online persona that his detractors have branded him a virtual Prime Minister.

It won’t be wrong to state that the cyber world has tremendously facilitated Pakistan Tehreek-e-Insaaf in terms of communicating with the masses and mobilizing people especially during the recent political stand-off with the government. 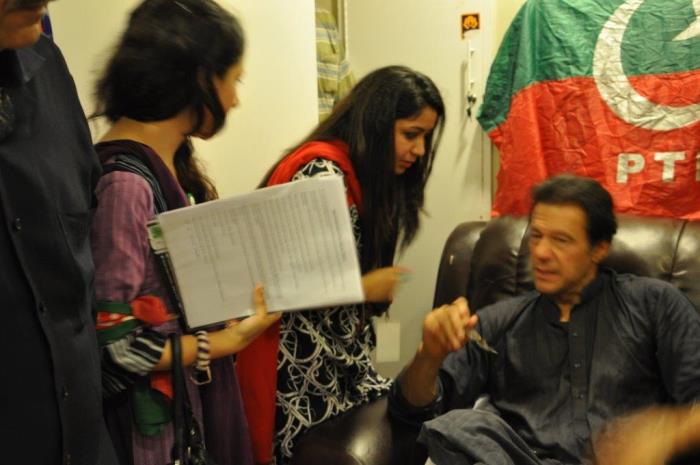 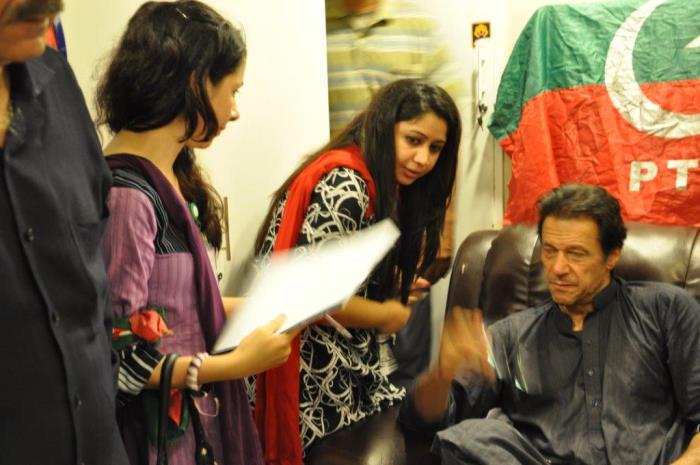 While, PhoneWorld Team went around to interview women and other people at the D-Chowk on the use of their smartphones during their political activities, it was lucky to get an opportunity to have an interview with the man himself who probably will also be labelled as the one who laid the foundation of mPolitics.

The man was surrounded with his followers and supporters’ and most discussion was around the future of Pakistan. The idea and purpose of our interview was to go beyond traditional political questions mainly focusing on how smartphone technology, as well as social media has emerged as pervasive and encompassing tools for politics in Pakistan.

Phoneworld discussion topics unlike tradition media people included questions on the use of social media in creating awareness among the masses, e-governance and m-governance projects and the impact of technology in bringing the much talked about revolution that PTI intend to bring in Pakistan.

While conducting the interview, we were impressed by his ability to pay attention to every single detail. IK was immensely driven by his passion for changing the world through connecting people and motivating them to stand for their rights-mobile technology being a cornerstone for such change.

How much smartphone and social media helped you in mobilizing people for the Azadi March? Where would you rank it in spreading awareness?
IK: Social media has played a remarkable role in uniting people under the same emblem. It is one intelligent media that helped us in spreading our message to masses especially the younger generation. Although TV has also contributed but it is also true that ‘Social Media’ has been a pioneering platform for us to build a strong bond with our supporters and the same has also become a medium to cease any boundaries between our supporters and us.

Your social media is quite active; how much of your personal attention and time goes into the social media team?
IK: Pakistan can feel the impact of change and this is because people are more educated, active and informed about their rights. My team is quite independent and competent in what they do but I am always available can they easily approach me whenever they need any guidance or help. Our basic objective through the social media campaign is to serve and spread timely and accurate information, and this has been made possible through the help of this emerging social media.

Is there any social media team for your twitter account?
IK: My twitter account is verified and I use it myself. I read all tweets and retweets to get the feedback from my friends, followers and supporters. Not only do I regularly tweet but I also read all my texts messages. I very openly express myself on twitter and I want to make it clear that any opinions that I express on twitter are my own and not those of my team.

One thing you really like about your supporters to do on the social media?
IK: First of all I would like to thank the youth of this country, who has turned this vision of change into a reality. As one of our supporters, who believe in PTI’s philosophy of change, I would expect them to use the modern tools such as twitter, Facebook, Instagram etc. and all other such medium to make a difference in your country. PTI’s supporters should spread the message of change to the common people to pave the way for a good across the country, that’s all I want from our youth.

Government in KPK has started online government services such as FIR registration etc. – what are other Electronic or Mobile based people centric projects & services should we expect from your government in KPK?
IK: Education and technology provide an opportunity for nations towards economic growth. By introducing e-Government projects will help us to move a step further to our cause; right now we are working on Rs.350 Million project that will help us to improve ICT Infrastructure for Government of Khyber Pakhtunkhwa.
KPK government is also working on many on-going and new projects such as, Computerization of registration deeds, arm licenses, cars and the revenue department. Not only is this, but E-showcasing of Industrial & Regional Products & Services of Khyber Pakhtunkhwa and E-enablement of Special Branch Police is also an on-going project. We need advanced infrastructure in information and communication technologies (ICTs) for running a transparent system.

Recently a group of hackers have attacked government’s websites and placed messages for PM, do you approve of this?
IK: No, certainly not at all. This is beyond decency that we preach our people. I do strongly condemn in the strongest possible words the attack of any official website; I would never allow any of my supporters to get into any criminal/illegal act or the use of abusive language that might portray a wrong impression.
I would also like to mention that PTI’s supporters are educated and fair; they would never indulge themselves into cybercrime or abusive language. It has been noticed by our team that there is a propaganda going on social media, by creating certain accounts that use abusive language to our rivals just to defame us.

There are many mobile games that have you featured in them, have you played or seen any of these? If so how do you rate them? Any idea for young developers if they want to develop such games?
IK: (Laughs)! Well, I haven’t seen any of them but I find the idea truly interesting. The youngsters of Pakistan are full of innovative ideas and they can really do well; I would only like ask them to keep the dream alive.

Anything you would like to say to our readers?
IK: Well, the response we received on the posts on our official pages regarding our cause is simply amazing; thousands of people liked, shared, tweeted and retweeted daily, making it quite clear that the youth is with us.
Pakistan is experiencing a high social media impact considering the rise of social media into mainstream politics. Being a part of this smartphone generation, I can say that few years back, these platforms were hardly a place to discuss the movements and developments of country and politics, but now the story is totally different. 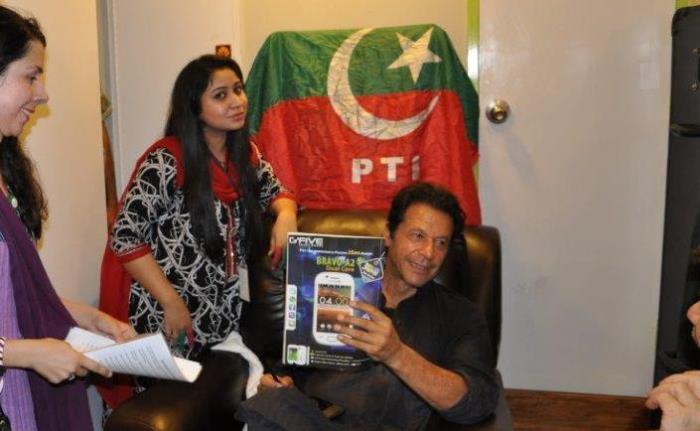