Some report has revealed that a mysterious upcoming Infinix phone is expected to be a first luxury device of the brand. In addition, the revealed report has pictures of this upcoming Infinix smartphone. Kenya leaker reveals the name of the phone and some specifications, as Infinix has a strong foothold in Kenya.

Infinix introduces its premium phones under the Zero series, and the latest entry of this range will be their first flagship. It is known as Infinix Zero X and is expected to follow the Infinix Zero 8, which launched last year. The flagship might possibly also be named Infinix Zero 10 because the ninth generation is being skipped.

First, it will have a curved display all over with thin-paper bezels. The front camera will feature a little hole punch style. Furthermore, under the panel is a hidden fingerprint scanner means it will come with AMOLED. On the side of the Infinix Zero X, the volume rockers and power buttons will be fitted. 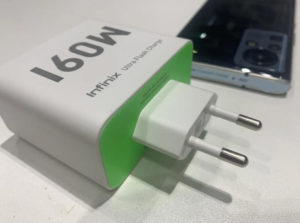 On the rear, we can see three cameras equipped with a rectangle plate. Infinix has also stamped ‘NOW’ in big letters over the backside. It’s derived from the slogan, ‘the future is now.’ The camera system is expected to include a huge 108MP wide main camera, an ultra-wide lens, and a periscope camera with optical zooming.

But probably the most ground-breaking feature here is the superfast charging that Infinix Zero 10 supports. As shown in a leaked image, featuring the phone and its charger, the Zero X can supply power at a stunning 160W power. No information regarding the Infinix smartphone price yet, but you may assume the price to be reasonable as it is an Infinix smartphone.

You may be also interested in OnePlus &#038; Oppo Merger: Both Brands to act as an Independent Entity