Instagram keeps on launching a new feature on and of and if we say it is known by them, it would be right. However, there is one thing that we can not outlook on how it is trying to make this planet a better place to live in by trying to stop things that effects people directly or indirectly. This time Instagram is quite serious when it comes to fighting fake information. The company has launched an Instagram Fast Checking Feature that will flag fake photos. By fake photos, the app means all those images that are photoshopped on purpose. 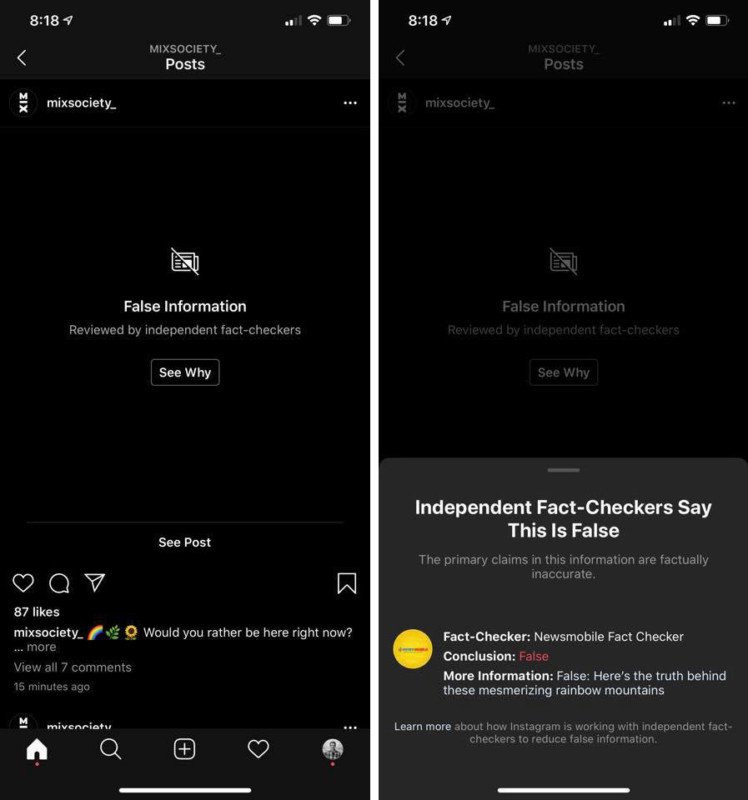 Some of the photographers are quite surprised with the news as according to them it will make it harder for hem to share their images that are photoshopped for a good reason. A photographer from San Francisco has received a “False Information” warning for sharing the photoshopped pictures. The photo was not wrong in any way instead of it just showed a man standing on a rainbow-coloured mountain.

When Instagram was inquired about the issue, it said that their AI works with a combination of feedback and technology. In this way, the app identifies which phot is fake. The photo is then sent to the third part app who upon realizing that it is fake, hide it under the warning.

The worst scenario is that Fake photos are removed from Explore and Hashtag pages automatically. While sharing his thoughts about it, Harriman said:

“Interesting to see this and curious if it’s a bit too far. “As much as I do love it to help better associate real vs Photoshop. I also have a huge respect for digital art and don’t want to have to click through barriers to see it.”