Recently Apple launched the two flagship devices namely iPhone X and iPhone 8. These are the first smartphones ever to support fast charging with USB-C. Out of utter shock we have just come to know that iPhone X and iPhone 8 both lag behind from flagship android devices in terms of charging. iPhone 8 & X Charge Slower than Flagship Android Devices: Tom’s Guide.

The report was released by Tom’s Guide. The test was carried on by using fast charging accessories. Devices which were tested were OnePlus 5T, LG V30, Google Pixel 2 and Galaxy Note 8. Tom’s Guide users Apple’s 29-watt wall adapter and a USB-C to lightning cable to test iPhone X and iPhone 8.

The test clearly identified that Android flagship device performed better than iPhones . Initially the devices were tested in 30 minutes of charge time. The OnePlus 5T won the game by reaching 59 percent half an hour.

LG V30 scored second position by charging 53 percent in half hour. The iPhone X, iPhone 8, and iPhone 8 Plus stood third, fourth and fifth with 50 percent, 49 percent, and 47 percent, respectively. 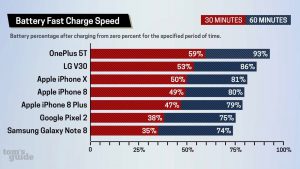 It should be noted here that iPhone device charge slower than android devices then still why people spend a lot of money to buy iPhone. It is worth mentioning here that this test is performed while keeping charging time in mind. Other features of iPhone X,8 and 8 Plus will be definitely performing well.

However Apple should work more in order to compete with other Android devices in fast charging. Only in this way it can maintain its big name in industry. I found this very interesting. What about you people?