Apple is all set to release 2018’s portfolio of iPhones and the marketing team has been advertising the most advanced iPhone models ever. Surprisingly we have come to know that the key feature from iPhone X Plus is removed. We came to know about this news from iPhone X Plus Leaked Image.

iPhone X Plus Leaked Image is an Utter Disappointment

The missing key feature of iPhone X Plus was highlighted by online source Benjamin Geskin. He took to Twitter and published a set of images which were said to be the Dummy units of iPhone X Plus.

While not all iPhone leaks can be taken at face value, the images below do seem to align with previous rumours and reports we’ve seen regarding Apple’s upcoming iPhone lineup.

Unexpectedly these leaked pictures of Apple iPhone X replicates the external features to allow the design and testing peripherals. People were anxiously waiting for the most hyped, Triple Camera as promised. However, the leaked prototype of iPhone X Plus shows up a dual lens assembly with a central flash unit.

Here is the closeup of iPhone X Plus Leaked Image: 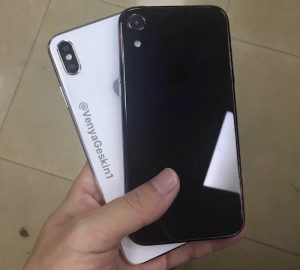