In a recent post by Ben Sandofsky who is the creator of the popular manual iPhone camera app Halide shows the massive change in the mode. He has shown the change in subject separation in iOS 12 and then he has compared it to what the current iOS 11 version produces. The difference is quite visible. Let’s have a look at that. 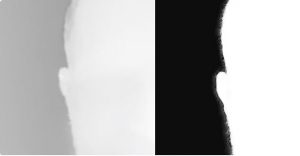 The left one shows the iOS 11 results while the right one shows iOS 12 depth data results. You can see that there is much more and much sharper detail in the image, compared to a rather blurry separation line in iOS 11. It is still unknown that whether Sandofsky refers to capture from the front or rear camera. It seems to be taken from the front camera but we are not sure about it.
We still don’t know that whether this particular feature will make it to the official iPhone camera app or not. However, it’s still a very impressive improvement with the same hardware. Many users are also wondering whether this improvement could be applied retroactively, to portraits that were captured in the past. We think that this will not be possible, but obviously, that is just a guess. We’re looking forward. Let’s see what comes next.

Also Read: How to use iOS 12 New Camera Effects for Messaging