ISPR Responds to the Fake Social Media Account News of Gen Qamar Bajwa. The DG ISPR’s statement via his tweet appeared after many supporters tweeted good wish messages to the new army chief on a twitter account.

DG ISPR Lieutenant General Asim Bajwa clarified that Pakistan’s army chief designate General Qamar Javed Bajwa has “no presence” on social media. And any accounts under his name are false. 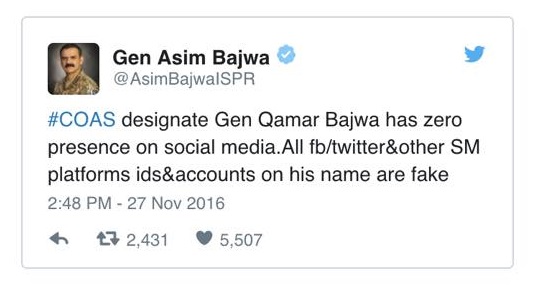 The military’s spokesperson revealed that,

“Gen Qamar Bajwa has zero presence on social media. All facebook/twitter & other social media platforms ids & accounts on his name are fake.”

The statement came just a day after Gen Bajwa was selected as the country’s new Chief of Army Staff (COAS). He will replace General Raheel Sharif on November 29.

The army’s spokesperson further added that an official change of command ceremony will be on Tuesday at the army’s general headquarters (GHQ) to welcome the arriving chief.

At present, Lt. General Qamar Javed Bajwa is working as Inspector General of the Training and Evaluation at the General Headquarters. He has also instructed the Army’s 10 Corps. He belongs to the infantry’s Baloch Regiment.

Bajwa is a graduate of the Canadian Forces Command and Staff College, Toronto, Canada, The Naval Post Graduate University, California and the National Defence University, Islamabad.