The first quarter of the year 2021 has remained great for Jazz 4G in terms of revenues despite the growing pandemic. According to the quarterly results announced by Veon, Jazz strengthened its position in the market in 1Q21 and has posted double-digit growth in revenues. The strategic focus of Jazz 4G has remained on 4G penetration and expanding digital services to drive future growth in the Pakistani telecom market.

Jazz 4G generated the highest-ever revenue of Rs. 55.05 billion during 1Q21, which is 11.7% higher than the Rs. 49.282 billion, the revenue it had reported during the same quarter last year.

Total revenue grew by 12% YoY, followed by another strong quarter for mobile data revenue, which grew by 28% YoY. Jazz’s 4G user base expansion acted as an important component that led to this growth. During this quarter, the telecom operator gained 3.7 million new users as compared to 2.9 million users in Q420. The penetration of Jazz 4G increased from 29% to 42% YoY, driven by a 62% YoY increase in 4G users. While these users contributed 12% expansion in Jazz’s total customer base, the ARPU declined by only 0.5% YoY in 1Q21. 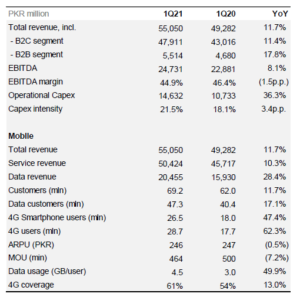