Jazz, Pakistan’s leading mobile network operator, has reached an exciting milestone as it celebrates 25 years of delivering successful and innovative solutions to the telecom industry, its customers and the country. Jazz has grown from a small telecom company to the country’s largest mobile network operator and an internationally recognized company within a span of 25 years. It is a journey of remarkable progress and milestones.

Jazz has always aimed to provide its customers with the best services and solutions to make this country strive for a better future. This was the company’s motivation and founding spirit with its original inception in 1994 and it remains the same, today. 25 years of connecting and empowering Pakistanis beyond the service of having people talk to each other on their phones is not an easy task but Jazz has achieved these goals spectacularly through its ongoing commitment to excellence coupled with strong customer loyalty.

In a matter of 25 years, Jazz conquered the Pakistani Market by providing the best and most cost-effective services to its customers. Being the largest mobile network provider in Pakistan, every fourth Pakistani is a Jazz Subscriber, and people have built trust in the brand, which is evident from Jazz’s ever-growing subscriber base. With more than 59 million subscribers, Jazz is connecting thousands of people in thousands of cities in Pakistan. Not only is Jazz Pakistan’s leading mobile operator but is also the most significant internet provider in the country with the most extensive data user base of over 35 million 2G, 3G, and 4G subscribers. Jazz customers are what makes this company what it is and their loyalty to the brand is what made Jazz achieve this significant milestone.

In addition to Jazz’s contributions in the Telecom Sector of Pakistan, the company has played a pivotal role in Pakistan’s socio-economic development. By bringing the most advanced technology into the country and strongly leveraging it to create a robust 4G ecosystem, it has opened up new business avenues for millions of Pakistanis, while strengthening the country’s economy through FDIs.

Jazz has remained number one at leading the digital revolution in Pakistan, introducing high-speed internet at affordable rates for the Pakistani people. The company’s extensive list of service offerings has expanded over the last 25 years in response to customers’ expectations and industry demands.

Jazz’s journey of 25 years is worth sharing. Jazz started its operations as Mobilink- a joint venture between Saif group and Motorola in the early 90’s who later sold it to Orascom Telecom, an Egypt-based multinational company. The Company was later sold to VimpelCom Group (now VEON Ltd.), a Russian Company and has remained a part of it till now.

In the days when no ecosystem existed, the company started its journey as a startup. The company is led by the original founding executive, Aamir Ibrahim and has maintained its brand name throughout its history. With the vision to connect masses, the telecom operator kept on improving quality while keeping the delivery consistent. Over the years, Jazz has been trying hard to create a technology-centric human resource base by training ICT managers and experts. This has allowed Jazz to make key business decisions that meet the specific business needs of its ever-growing customer base.

In the span of 25 years, Jazz has created a host of successful relationships with the public sector. The most outstanding and successful collaborations include: 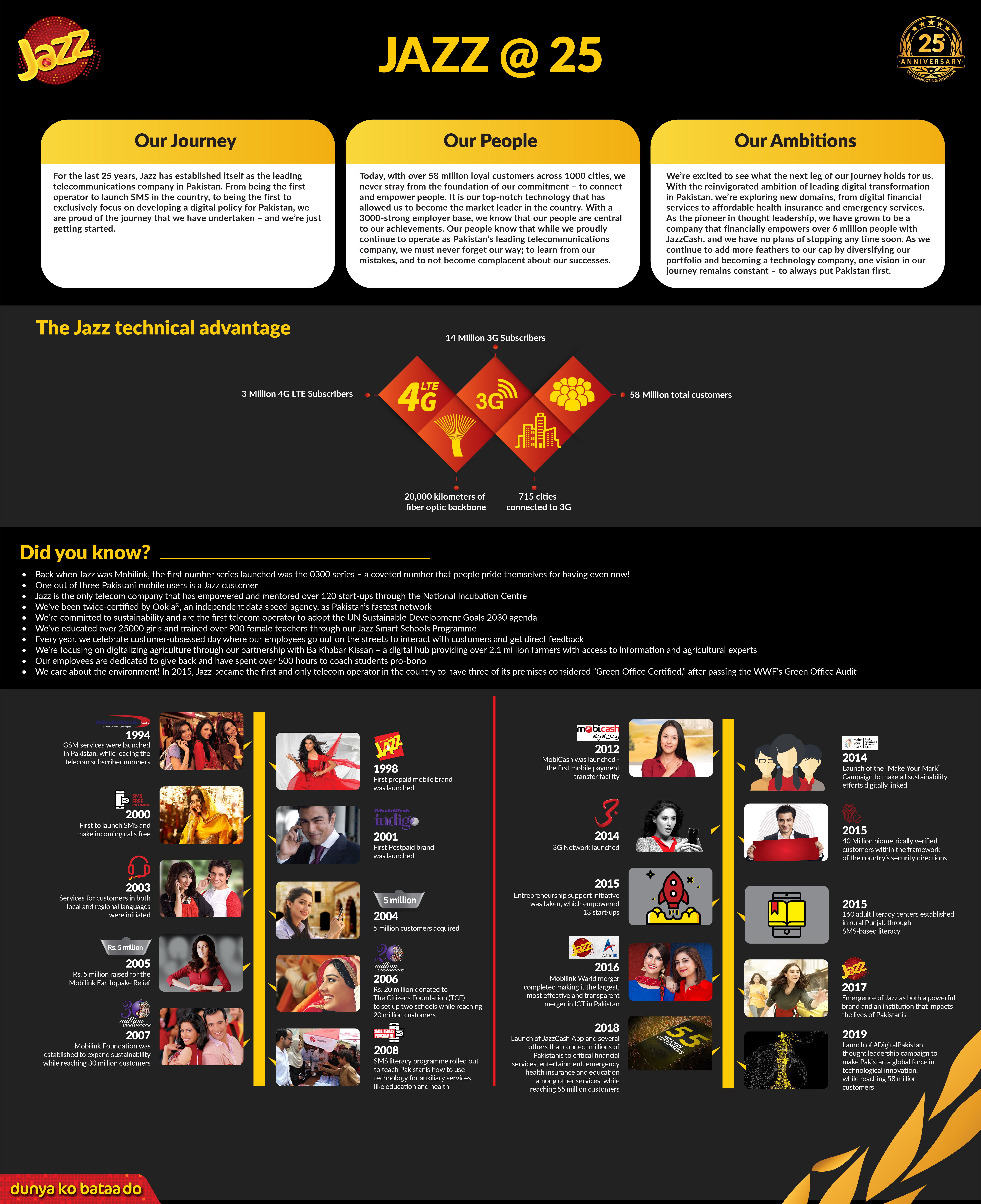 Since its inception, Jazz has also invested USD 4 billion on infrastructure development and expansion, spectrum auctions, human resource development and community services. Over the years, Jazz has remained the number one choice of customers due to excellent network coverage joined with its fair and competitive commercial packages.

How Jazz is celebrating its 25th Birthday:

To celebrate its silver jubilee, Jazz has been holding special activities throughout the month, involving employees nationwide:

To commemorate the occasion, Jazz launched a special 25th Anniversary logo for the company. Ursula Burns, CEO of VEON Ltd., Jazz’s parent company, was present along with Jazz’s employees and senior management, as the logo was unveiled amidst fireworks and a cake cutting ceremony. 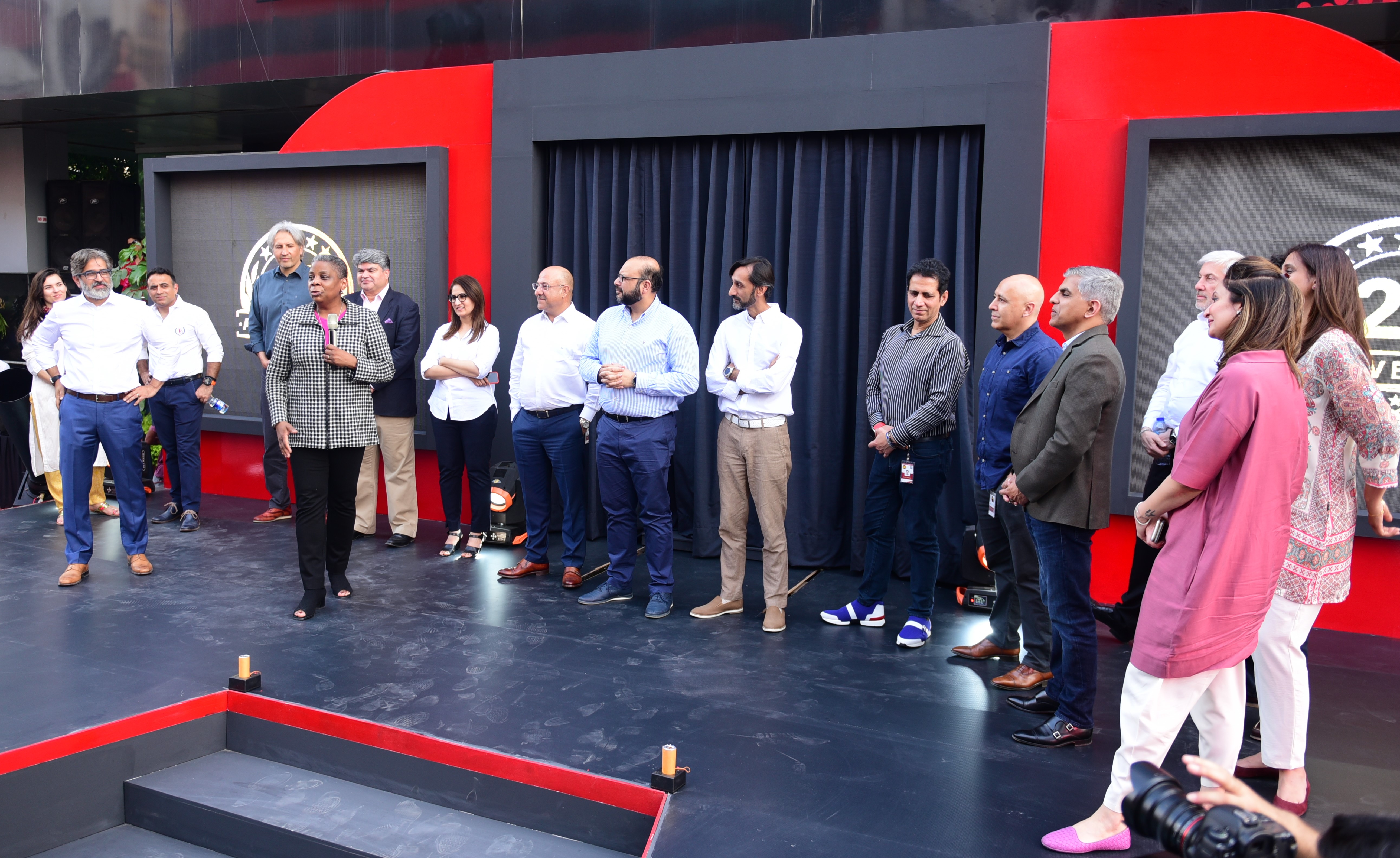 This special logo is being used in all of Jazz’s official communications.

Jazz is holding a speaker series called Jazz Talks. This 4 part series will give its internal employees a glimpse of Jazz’s journey through the people who played a pivotal role during Mobilink’s early days. Through informal discussions with its Alumni, Jazz desires to give employees an overview of Jazz throughout these years, the impression it has had on its people, the leaders the company is proud to have produced and the impact Jazz has had on the telecom industry and Pakistan at large.

With this speaker series, Jazz hopes to shed light on what it takes to build a successful mobile operator and how to carry forward this legacy in the digital age. These Talks also provides a fun, informative and interactive platform for new Jazz employees to know more about the company they work for.

To see what Jazz’s CEO, Aamir Ibrahim said about his initial years at the company, see the Tweet below:

The transformative 25-year journey from Mobilink to @jazzpk starts with its people. Here is the inception team of this company that talked about their journey. Here is mine in all its humility: pic.twitter.com/uMz5PWGUSl

Jazz hosted 20 iftaris in 20 cities throughout the month of Ramadan for their Leadership and Support Staff. Through these events, Jazz wanted to share the joy of turning 25 with their support staff, while also creating an opportunity to break down the walls that separated the leadership from those in the Jazz family working in remote areas by coming together without distinction, title, function, or task.

In the last 25 years, Jazz has accumulated a host of feathers in its cap. Some of the most memorable and industry first accolades and activities are mentioned below:

Launched in October 2017 with the Knowledge Platform, the Jazz Smart Schools programme has been a success story. In Pakistan, where 38% of school-going students hardly know how to string a sentence in any language or do basic math, the programme has successfully taught 28,000+ middle school girls blended digital learning in 75 public schools of Islamabad. More than 800 female teachers have been trained to use technology to teach using smart learning solutions based on the existing curriculum. 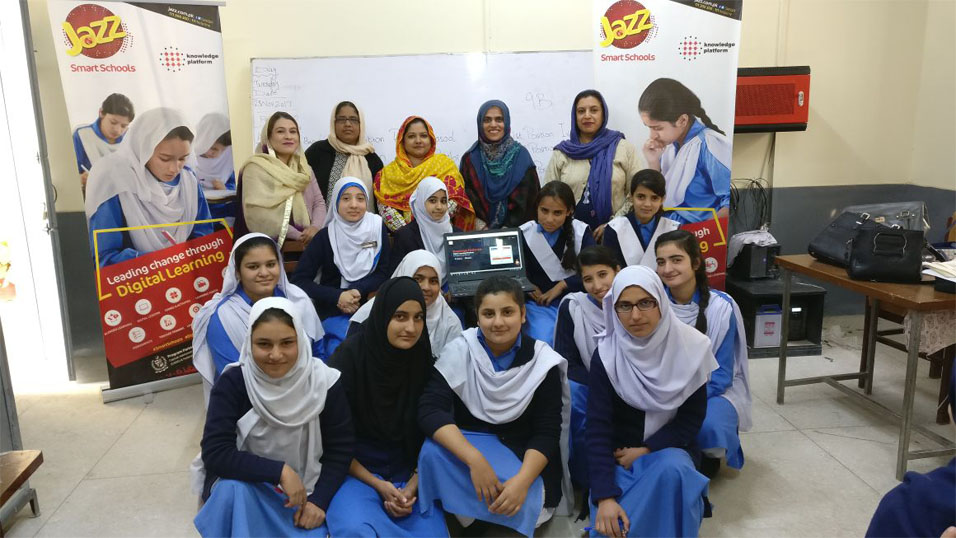 Jazz has won the Ookla’s Speedtest Award twice in a row during Q3-Q4 2018. To win this award, Jazz achieved a Speed Score™ of 16.01, with average speeds of 17.13 Mbps for download and 10.74 Mbps for upload which is significantly higher than other competing networks.

JazzCash is a branchless banking service provider founded in the year 2012 by Jazz. Since then, it has witnessed tremendous growth in terms of subscribers and transactions.  JazzCash has 14 million users with 30 days active wallets. Having 5.2 million active users, JazzCash has witnessed 52% growth since last year. 50 million tractions are observed per months which marks 48% growth from 2017 to 2018.  When it comes to trade, JazzCash sees transactions of PKR 100 billion per month which has seen58% growth year over year from 2017 to 2018.

Jazz World app was launched as a customer engagement platform in January 2018. Subscribers can use Jazz World to check their prepaid mobile balance and postpaid bill, recharge credit, pay phone bills, and access usage history or simply subscribe to the best packages. Subscribers can also use it to submit and manage complaints, buy SIMs and much more. The popularity of this app-enabled it to cross one million active users within five months of its release on iOS and Android.

We wish all the best for future projects.