Now Khan Meter will Tell us Where PTI stand

Imran Khan will soon take oath as the next Prime Minister of Pakistan and as soon as he takes the oath, this Khan Monitor website will start working. When asked what made him come with such a brilliant idea, Saeed revealed that he decided to develop Khan Meter when people were making fun of Imran Khan’s promises. 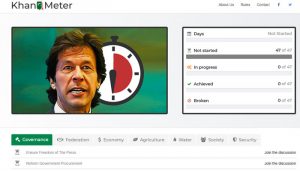 Khan Meter is divided into the number of passing days, and PTI’s goals that are either in progress, achieved or broken. The website shows the Top priorities of PTI extracted from party’s 100 days agenda.

The website provides a detailed breakdown of the promises that the PTI chairman had made and they have been divided further into seven categories; economy, agriculture, water, society, security, governance and federation.

The best thing about Khan Meter website is that allows discussion for each category so that public can actively comment on PTI’s progress.

“Those who have voted for Imran Khan and his party are active now to keep an eye on their performance after they form the government in the federation.”

“I am working on extending it to five years and getting all the points they plan to work on from their 2018 election’s manifesto.”

This is a very good and different initiative as we only vote political leaders and forget to monitor the promises they make during election campaigns.