According to a local media story that Apple Inc. is investing $3.6 billion as part of a deal with the South Korean auto maker KIA motors corp. to produce electric cars.

The report claimed that on February 17, the agreement will be signed. Apple is expected to manufacture 100,000 vehicles annually at the Kia Motors plant by 2024 and plans to increase that annual capacity to 400,000 in coming years.

Apple analyst Ming-Chi Kuo yesterday announced potential specs for the vehicle with regard to the Apple Car itself. On a complete charge, the car would allegedly have more than 300 miles of range, and can get 60 miles of range in a five-minute charge. In less than 3.5 seconds, it will also be able to go from 0-60 mph, and have a peak velocity of 160 mph.

Kuo also said that, the car will also be manufactured in collaboration with Hyundai. His timetable is not completely in line with this latest Korean study, as Kuo said the car will probably launch in early 2025. 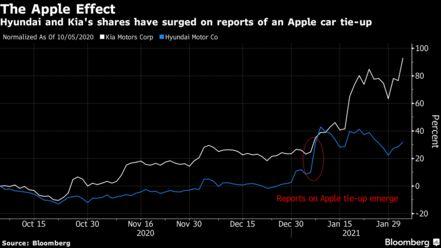 The funds of Apple will be used to create exclusive Apple Car manufacturing facilities. An electric Apple car will rival Tesla Inc. vehicles and businesses like upstart Lucid Motors and China’s Nio Inc. The design of Apple clearly means that it is possible to pack more active material within the battery, giving the car a potentially longer range.

It can cost billions of dollars to set up a car plant and take years, probably the reason why Apple talks to potential partners. Partnerships have also been pursued by other technology firms looking to grow into automobiles.