We already shared it with you guys that Huawei’s subsidiary, Honor is all set to wrap off a new series. Honor 9X will be a member of that series which will see the light in China on July 23. The brand’s CEO, George Zhao, announced the official launch date via a post on Weibo. Today, a new teaser poster has confirmed that the Upcoming Honor 9X will be powered by all-new Kirin 810 SoC.

So, if you people want to know about the Kirin 810 chipset then you are at the right place. The new Kirin 810 made official debut two weeks back. The chipset features an octa-core CPU comprising of six Cortex-A55 cores clocked at 1.88 GHz, and two high-performance Cortex-A76 cores running at 2.27 GHz. Furthermore, the SoC also has a Mali-G52 MP6 GPU. It is claimed to offer a 162% better performance than the predecessor, Kirin 710 SoC. So, it is expected that the smartphone will be a good package performance-wise at a reasonable price. 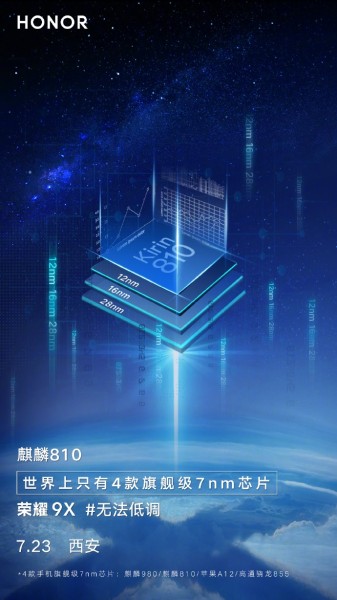 In addition to that, a previous teaser poster officially says:

“Honor 9X is fast from the inside. Born to be low-key”.

It means that the upcoming smartphone will be a mid-ranger with impressive hardware. Moreover, the company has not revealed any further information regarding the specs of the device yet. Let’s see what comes next ahead of its launch. Till then, stay tuned for more updates.