Relame’s most rumored flagship device, GT2 Pro is confirmed to be launched on December 20. The live event is going to take place at 9AM UTC. This news regarding the Launch Date of Realme GT2 Pro has come from a very credible source: the CEO and Founder of Realme, Sky Li. The news was announced on Twitter along with other world-first futuristic initiatives and the amazing design of the device.

The most important thing about GT2 Pro is that it is the world’s first device to come with the Qualcomm Snapdragon 8 Gen 1 chipset which is the latest flagship chipset manufactured by Samsung.

According to the previous leaks, the device is going to include an under-display selfie camera along with a camera visor design at the back.

Below is the official teaser, confirming the launch of the device: 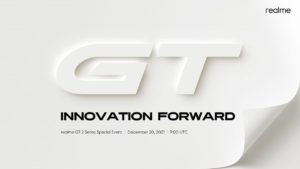 Moreover, Realme GT2 Pro is going to offer 65-watt fast charging according to the certification. This device appeared with RMX3300 model number while its charger carries the VCA7JACH identifier. While much is not known about the devices, many tipsters have revealed that Realme GT2 Pro is going to bring a 6.51″ AMOLED screen with a refresh rate of 120Hz LPDDR5 RAM and up to 1TB UFS 3.1 storage.