Vivo X23 is just a few days away from its launch. The company is set to launch their upcoming phone on September 6. As the launch date of Vivo X23 is getting near, we are getting more leaks and rumors regarding the device. After the revelation of different color options, launch date, and Live images, Vivo X23 specs got leaked in a presentation slide. It further reconfirmed what has already been outed about the X23.

The upcoming smartphone will feature a 6.41″ 1080×2340 Super AMOLED touchscreen with 19.5:9 aspect ratio. Moreover, it will have a 91.2% screen-to-body ratio. Vivo X23 will sport a Snapdragon 670 chipset at the helm. In addition to that, it will support 8GB of RAM and 128GB of storage. Unsurprisingly, it will also support 4G+ networks.

Furthermore, the handset will have a fourth-generation under-display fingerprint sensor that has already been confirmed for the X23 by its maker. The phone will have a 32-bit DAC that is most probably the AK4377A from AKM. Coming to the camera setup, the Vivo X23 will feature a 12 MP selfie snapper, and a 12 MP + 13 MP dual rear camera setup. The main sensor will be Sony’s IMX363. 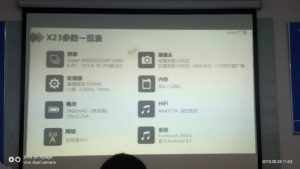 Moreover, the upcoming handset will feature a massive battery of 3,400 mAh. The massive 3,400 mAh battery will be charged fast using 22.5W cable and power brick. The phone will run Android 8.1 Oreo underneath Vivo’s Funtouch OS 4.5 straight out of the box. However, there is no information that whether this upcoming device will have bezels or not. Not even there is any information about the notch.

There are still no words about the price and global availability of the upcoming smartphone. Only a few days are left in its launch. So, we have to wait for a few days to know more about it.

Microsoft Office 2021 will Launch Alongside Windows 11 Without a subscription