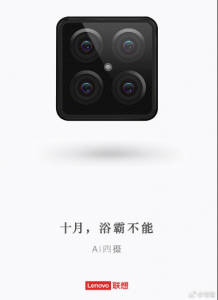 The teaser image suggests that Lenovo may launch a smartphone with four rear cameras. However, still we ca’t say it with surety as the company’s Vice President has a habit of misleading people with his posts. Back in May Mr.Cheng posted several teasers that showed the Lenovo Z5 would be a total bezel-less smartphone, however, When the smartphone was finally announced, it was a total disappointment due to the presence of a large thin at the bottom and notch on the top. These two details were not showed in teasers.

So just wait for the release of this upcoming smartphone and then we will see that how the teaser gave accurate information about the device.