In May, Lenovo officially teased a notchless phone with a 95% screen-to-body-ratio. However, now it has confirmed by Lenovo VP, Liu Jun that device was real named Lenovo Z5 Pro, when he showed it in his hands during a press conference in Beijing.
The company is getting ready to announce the Lenovo Z5 Pro. It has been confirmed by the company that customers will see the notchless, bezel-less display promised for the Z5. Moreover, the phone employ the pop-up selfie snapper as seen on the Vivo NEX S and the Oppo Find X. The Lenovo Z5 Pro is also expected to come with a fingerprint scanner embedded in the phone’s display. The device might come with some sort of face unlock system. 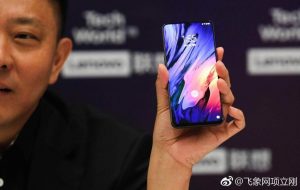 The device was briefly showed off by VP of the company during Lenovo’s Tech World 2018 event in China but he didn’t give more details about all the specs and it to come on October 11th.

The Weibo post said that according to Liu Jun the Lenovo Z5, which launched a few months ago, sold very well in China. Let’s see how the device will look like once we get it in our palms. However, those who have seen Xiaomi, OPPO, and Vivo would have idea of its design.