LG is about to announce its next flagship device in a week, named G7 ThinkQ. It seems like by the end of day we will be getting each and every information about LG G7 ThinkQ. VenutreBeat reporter and authentic leaker Evan Blass  posted a news image on twitter, showing each and every side of LG G7. LG G7 ThinkQ Image Leak shows a thin device.

We are getting plenty of leaks regarding the device but it seems there is nothing left about the device after the leak of G7 image from all sides.

Previous leaks revealed that the phone will come in Five exciting colors. The best thing about the phone was that it can hide its notch to make its screen look bigger.

It also has an extra button that will be used to activate Google Assistant. According to rumors, one of LG G7 ThinQ‘s side buttons is a dedicated Google Assistant button. This means the G7 ThinQ will be the world’s first phone to offer a physical way to call up Google’s digital assistant. 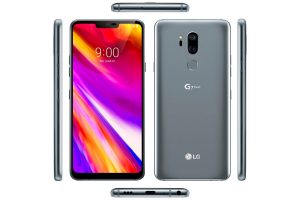 LG will get branding of ThinQ, which means that this device will have AI features. It is expected that the LG G7 will be the most favorite smartphones of 2018.  In the new images leaked by TechRadar, one of the boot logo of the LG G7 clearly shows the ThinQ branding on the screen.