This time you will find something different about the LG G7. This device will have an iPhone X-like notch, as do many other Android phones launched at MWC 2018, but it comes with a distinctive trick. Leak says that LG G7 will Come with Optional Notch Display.

At the top on the LG G7 the notch cut out is optional, You can turned it off through the software settings. So the choice is yours, you can either show the notch cut out like the iPhone X, or hide it behind consistent screen bezel as we see in the Samsung Galaxy S9 and S9 Plus.

The LG G7 will come with Google’s future Android P update, which moves icons like the time and battery life percentage to the top left and right corners. According to Techradar That notch software trick gives benefit to LG’s G7, as it allows for more screen real estate in portrait mode by moving the icons further up. 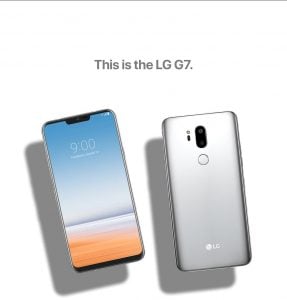 All this information is based on leaked images and videos. So we can’t say anything about the looks and design of G7 that it would be same as we see in leak images.

LG G7 will integrate the AI camera features, this will enhance the utility derived from the 16MP dual-lens rear camera. It has also been rumored that the LG G7 will be powered by a 3000mAh battery.

LG G7 will run on the Qualcomm Snapdragon 845 chipset paired with upgraded RAM and more storage than the LG G6. The fresh rumors have indicate that the LG G7 and rumored LG G7 Plus release date could be as late as May. The cost of LG G7 will be more than the LG G6.

The leaked images show that there is still a big bezel at the bottom of the G7’s screen, which means the notch isn’t even there to keep the rest of the phone’s bezels uniform.

Read Next: LG to Launch First Drone Phone- LG U+