The upcoming LG K92 5G smartphone has appeared on Google Play Console with some of its key specs. The K92 5 G has not appeared in news for the first time. Evan Blass, a reputed tipster, shared his leaked smartphone render to reveal its whole design at the beginning of this month.

The LG K92 5 G is included in the Google Play Console listing. It shows that the display of the phone has a punch hole in the top center. The front image resembles the image that was shared by Blass. In the Play Console listing, the screen size of the LG new upcoming device is not mentioned. The display supports a full 1080 x 2.400-pixel HD+ resolution, a 20:9 aspect ratio, and a 420pixel density. 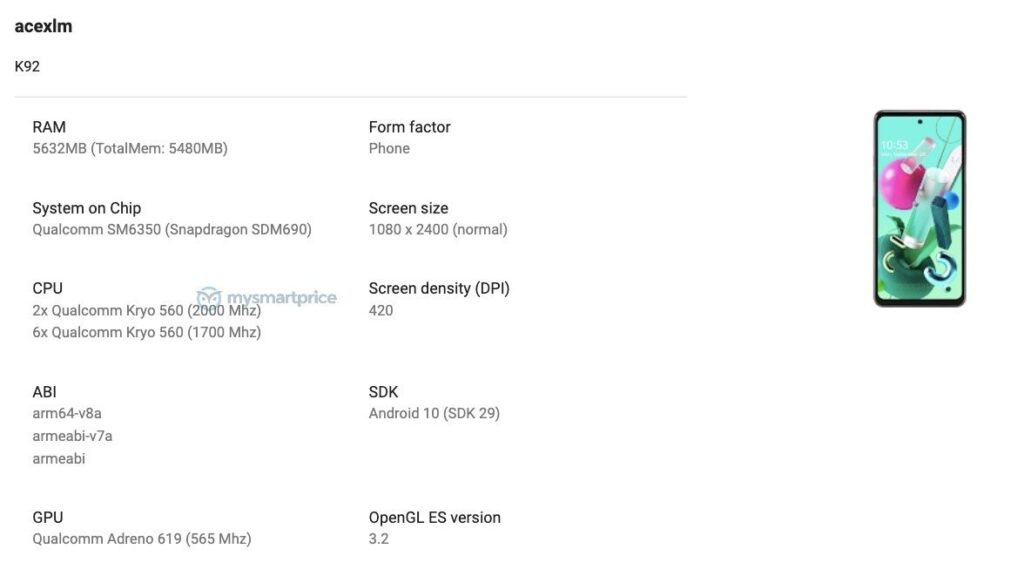 The LG K92 5G boots Android 10 operating systems and has a RAM of up to 6 GB. The phone draws power from the 5G Snapdragon 690 Chipset of Qualcomm, the SM6350. The other phone specifics are hidden, but some of their speculations are suspected that they might take from the LG Q92 5G phone powered by Snapdragon 765G.

The LG K92 5G’s leaked rendering reveals the design of its rear side. The left corner side of the back is fitted with a 64-megapixel sensor and a quad-LED light unit is in the right corner. It is also equipped with a fingerprint sensor facing the side.

The smartphone will be available via Cricket Wireless to the United States markets. It is understood. There is no description, however, whether the K92 5G will be reached in other markets. For now, it is almost all that we have on the upcoming LG K92, but in the next few days, we will collect more information about it.

You may be also interested in: Here are Leaked Specs of LG W31