From many days we have been listening that LG is going to launch LG V35 ThinQ very soon. A reliable resource, Android Headline provides multiple details about the phone.

The best thing about LG ThinQ is that it features a dual camera setup made up of two 16-megapixel cameras. One camera is with f/1.6 aperture and 10 bit HDR compatibility. Other one is with a wide angle lens with 107-degree field of view. 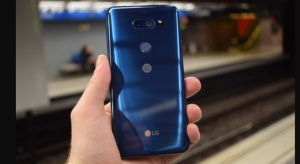 LG has granted ThinQ branding to all it’s devices that uses its own artificial intelligence technology. It means that V35 ThinQ will have multiple AI capabilities including LG’s AI Cam and Google Lens. V35 ThinQ will use far-field voice recognition to improve voice assistant functionality. It will allow the phone to hear your voice up to seventeen feet away.

The best thing about the previous LG V30 was its Audio and this time again company will keep the focus on audio for V35 ThinQ. The device will have 32-bit Hi-Fi Quad DAC with different options for the user for adjusting sound how ever they like it. LG allegedly claims the edge-to-edge design has been crafted to “fit in the palm of your hand.”

The detailed leak of LG V35 ThinQ suggests that device is about to be released. LG V30 was launched at the end of July last year so we can expect that LG V35 will also launch around the same time.

LG is also expected to announce G7 ThinQ. May be both the devices will be released at the same time as their were rumors that LG is going to launch two flagship devices in May. It means that LG fans would have choice to select between LCD (G7) or OLED (V35) display.

Well these all are rumors but rumors are always 80 percent true. For now we all know that G7 ThinQ will be announced on May 2. So what do you plan to buy LG G7 or LG V35?