Limofied – an Australian-owned, rapidly growing ride-share, car-hire and car-booking app, has been launched in Pakistan. After a magnificent launch in Lahore recently, Limofied-Australian Rideshare and Car-Booking app Launched in Faisalabad too.

It allows passengers using smartphones to submit a trip-request, which is then transmitted to the closest Limofied™ drivers, who use their legally registered vehicles to provide timely, comfortable, courteous and most economical transportation services, to diverse segments of consumers.

A grand ceremony was held at a local hotel, to launch the services of Limofied™ in Faisalabad and some surrounding rural areas too. So the people of Faisalabad can now conveniently book a car for point-to-point travel, airport transfers, weddings or special events for corporate clients and leisure travels. Soon, these services will also be expanded to Karachi and all other important cities of Pakistan. Limofied will bring a whole new standard of high quality, professional car-travel services, which Uber and Careem have failed to deliver.

The wide range of Limofied features, includes ‘Le Femme’ an exclusive program for nurturing female drivers (Captains), to empower and facilitate women. It promises the ultimate security and peace-of-mind for the female passengers, who prefer to be driven around by a well-trained lady-driver. The customers can access reliable 24/7 facilities, through a world-class App, website and service center – seamlessly connected to its vast network of professional and licensed drivers. It is the ideal choice for discerning clients, who value their time & safety, while appreciating quality delivered by the industry’s best drivers, reaching them on-time, every time.

“Being a Pakistani living abroad, it was my desire to make innovative contributions to empower the deprived segments in our motherland, through technological solutions, that create sustainable employment opportunities. Limofied is the first platform that is introducing ‘Motorcycle Taxi’ in Faisalabad, allowing the bike-owners to earn a respectable income.

Limofied has added two more services in its App at Faisalabad Launch. A service called MOTOTaxi, (Motorcycle Taxi) and the Rickshaw.

Limofied has added two more services in its App at Faisalabad Launch. A service called MOTOTaxi, (Motorcycle Taxi) and the Rickshaw. The App will now allow the students of the university and college to travel on less using its MOTOTaxi service, a motorcycle taxi service which will cost less then the conventional travel. It will create ease of travel for students and will also create jobs. Faisalabad has a massive population of the Rickshaws and at present the community is looking for the solution where they can call the Rickshaw with ease rather then running after them on the roads. Limofied App will cater for the both new MTOTAXI and RICKSHAW services along with the Limofied Business Class and Premium Economy.

MOTO Taxi Fares are as follows:

Rickshaw Fares are as follows:

After Lahore, Limofied is proud to expand to Faisalabad – which is the birth-place of its Chief Technology Officer & Co Founder – Mr Zahid Khan. The vast business-community in the industrial hub – Faisalabad is very happy to see that Limofied has a firm belief in the great potential of this business hub of Punjab. Kashif expressed his commitment and love for the people of Faisalabad.

Limofied-Australian Rideshare and Car-Booking app Launched in Faisalabad. With the CPEC – Gwadar project being built throughout Pakistan, our business community needs world-class services. Limofied will make sure that various consumer-segments get their desired quality of services – Business-class facilities for the business travelers and premium economy services for the economy travelers. With Limofied; everyone will be a winner.

We have created the most innovative transport-management application, customized to Pakistan’s needs. We have a vision to empower the local businesses by providing them the most versatile platform, to deliver a wide range of world-class services, with unmatched convenience. Limofied has successfully optimized the advantages of today’s revolutionary telecom technologies and mobile networks.

Limofied™ is already available in most major cities of Australia and many European cities too. Its network is growing rapidly due to its cost-effective pricing, transparency and simplified app design. After Pakistan, this service will soon be launched in many other regions including: USA, UK, Canada, Middle East and Asia.

‘Always On Time’ is the key promise of Limofied, as it delivers an unparalleled degree of reliability along with Multiple Options for Booking your rides in advance, via our website, phone or mobile app. At the end of the ride, the passengers get an auto-generated e-receipt for the exact amount you have paid. Using proprietary technology, every car in the Limofied fleet is tracked. The passengers can also track their ride through our mobile app. In-app text messages, along with email updates, are sent to the customer, when the car is on its way and when it has arrived at a pick up location. 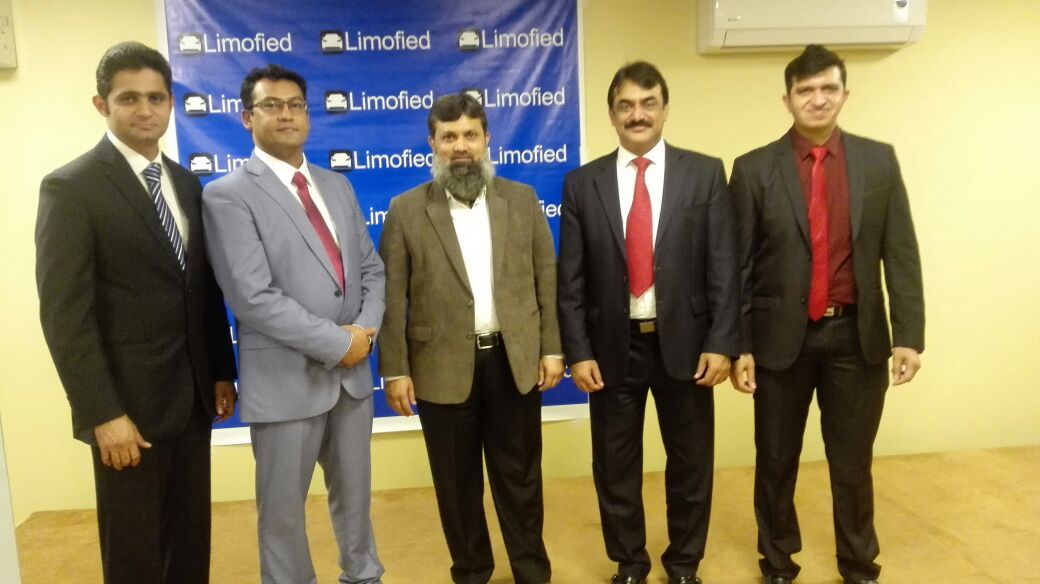