The first chip designed specifically for Mac known as M1 has introduced by Apple. The new chip by Apple is delivering incredible performance, custom technologies, and revolutionary power efficiency.

M1 is optimized for Mac systems in which it is important to maintain a small size and take care of power efficiency. As a system on a chip (SoC), M1 is coming with numerous powerful technologies into a single chip. Moreover, for dramatically improved performance and efficiency, it features a unified memory architecture. 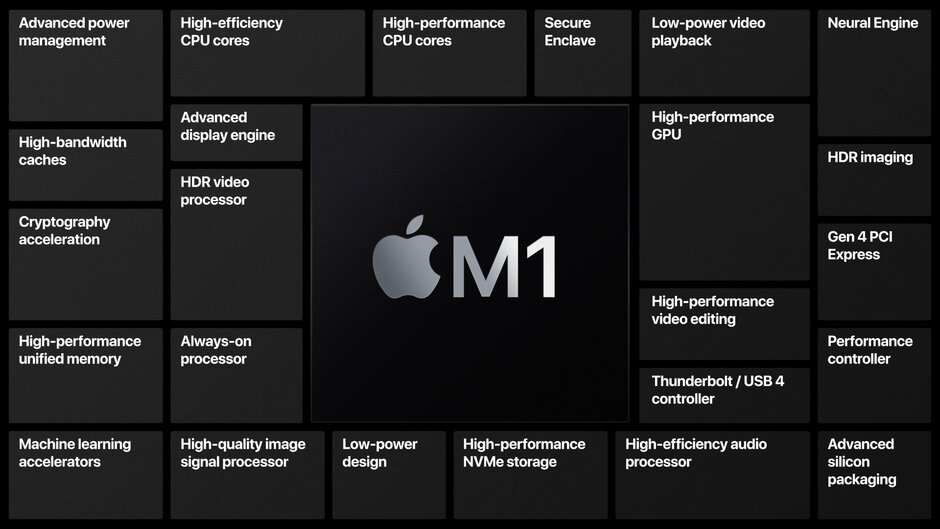 The M1 chip carries the CPU, the GPU, the memory, the neural engine and the cache. All this helps in fast data transferring between the components lightning-fast as well as reduces the size of the computer’s mainboard, providing huge space for the batteries. The 5nm process and packs 16 billion transistors, almost 50% more than the A14 Bionic’s 11.8 billion are facilitating the chip to work smoothly.

Johny Srouji, Apple’s senior vice president of Hardware Technologies said, “There has never been a chip like M1, our breakthrough SoC for the Mac. It builds on more than a decade of designing industry-leading chips for iPhone, iPad, and Apple Watch, and ushers in a whole new era for the Mac, When it comes to low-power silicon, M1 has the world’s fastest CPU core, the world’s fastest integrated graphics in a personal computer, and the amazing machine learning performance of the Apple Neural Engine. With its unique combination of remarkable performance, powerful features, and incredible efficiency, M1 is by far the best chip we’ve ever created.”

Both the CPU and the GPU are sharing 8GB of RAM, packed in the chip. It is consits of four performance cores, each core runs a single task as efficiently.

Recommended Reading: Apple Watch App that ends nightmares is on its Way