Facebook Boss, Mark Zuckerberg Gets his Harvard Degree After 13 Years. The youngest billionaire was dropped out of Harward university due to his work on Facebook.

After 13 years of dropping out of universities, Zuckerberg returned to the university and launched the world’s biggest social network. Due to his excellent work he was honored with doctor of laws degree.

Mark Zuckerberg Gets his Harvard Degree After 13 Years

The owner of Facebook, addressed the 2017 commencement and joyfully thanked the Harvard administration for the degree. he also visited his old dorm room.

A 33 year old billionaire posted a picture with the degree and parents’ with a nostalgic caption which reads as:

“Mom, I always told you I’d come back and get my degree,” 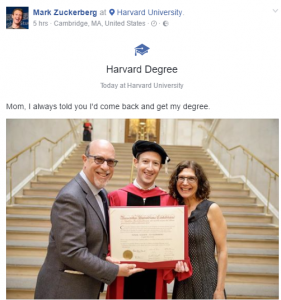 The biggest tech firm, Facebook became famous from a website he created in Harvard campus. Zuckerberg left Harvard in May 2004.

“I’m here to tell you that finding your purpose isn’t enough. Our challenge is to create a world where everyone has a sense of purpose.”

Zuckerberg explained the youth that its his generation time to build great things. He urged on doing big things with the reason to create progress as well as purpose.

“There is something wrong with our system when I can leave here and make billions of dollars in 10 years while millions of students can’t even afford to pay off their loans, let alone start a business.”

Zuckerberg said this generation needs to find creative solutions to social problems. He shared his desire of having a society that should not measures progress with economic metrics but with other meaningful roles in society.